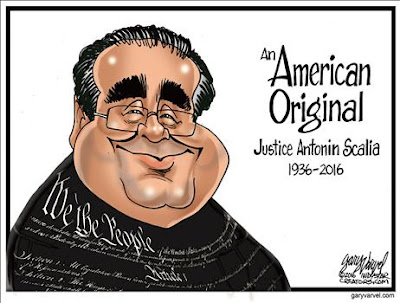 Chief Justice Antonin Scalia passed away this past Saturday.  His body is scheduled to lie in repose at the Supreme Court tomorrow.

I'm no legal beagle, and prior to the Era of HopeandChange, I've hardly paid any attention to the SCOTUS (Supreme Court of the US) nominee process.

This time, the "tie-breaker bench" is up for grabs, and it seems like political food-fight erupted before the late justice's body settled down to room temperature.

Our Dear Leader has promised to nominate someone who is indisputably qualified for the bench.


Of course, Congressional Republicans have either made demands that any SCOTUS nominees be delayed until the new president is inaugurated, or vowed to veto any of O's picks.

Mark Steyn has a personal interest in having another conservative in the SCOTUS.

The Diplomad doesn't think The Year of the Monkey is getting off to a good start.


To paraphrase a quote debatably attributed to Plato:  Only the dead have seen the end of legal battles.