Well, the Dimtard Grinches have stolen Thanksgiving, a holiday libtards have been triggering over for some time now.

This past Sunday, our state governor, Jay Inslee, announced a new round of restrictions, allegedly to combat the spread of the Chy-Nah Virus.

And just like that, we’re back to Soviet-style shopping...

...with toilet tissue and paper towels being the first items to fly off the store shelves.

I say “...allegedly to combat the spread...” because if you read through the governor’s decree, you’ll see all sorts of restrictions on public and private gatherings.  It’s funny though, how this wasn’t a concern when the “mostly peaceful protests” were on the front-burner of the Ministry of Truth’s gaslighting propaganda.

And media minions continue to gaslight us about the 2020 Election along with the violence against Trump supporters.

This topic, however, will be discussed in detail later.  So getting back to the renewed lockdown:  Washingtonians aren’t the only ones facing Mass House Arrest 2.0.

Since I’m now a “lifetime member” of the high-risk health category, I don’t delve too much into the Mask/No Mask Debate.  Despite my own health issues, I still think the decision on whether or not to wear masks should be a healthy individual’s or family’s decision.  Not a government mandate, especially in privacy of peoples’ homes.

But to paraphrase the conclusion of George Orwell’s Animal Farm:

Some gatherings are more equal than others, like the Biden Victory Block Party, that occurred in Seattle's Capital Hill area a couple weeks ago.

Here’s a sample of recent and upcoming gatherings in Seattle...

I'm sure more than 5 people showed up, or will show up for these "mostly peaceful protests."

Nor is leftist-approved protests the only source of leftist hypocrisy.  Dimtard tyrants love imposing decrees upon their subjects, but don’t feel bound to abide by them.

Governor Newscum of California was busted for attending a non-Covid compliant birthday party.

And if Creepy Uncle Joe is actually sworn-in as El Presidente #46, then Mass House Arrest 2.0 will most likely get worse.

Senator Rand Paul warned:  We can’t go on like this forever.

Regarding the impact this all may have on the economy, I’ve never been a fan of the Black Friday feeding frenzy.

However, I am concerned about the impact it will have on businesses, and ultimately their owners and employees.

The Chy-Nah Virus will limit bargain hunters to on-line shopping.  But will it be enough to keep the economy going?

Since the beginning of the pandemic, I’ve never considered the Chy-Nah Virus to be “fake news,” but I don’t consider it an Extinction Level Event either.

Nor do my concerns about shutting down the economy—and ruining peoples’ livelihoods—mean that I don’t care about the spread of the pandemic.

My point of view is right here in the middle: 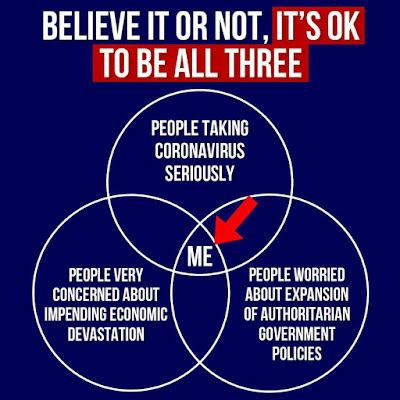 Well, no matter how events unfold for the...ahem...next “couple weeks,” I hope everyone manages to have a safe and happy Thanksgiving.