To the Shores of Tripoli... 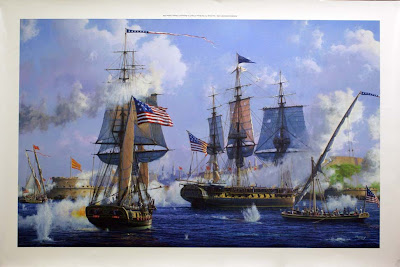 (Image:  Raymond Massey's To the Shores of Tripoli limited edition print)
...then and now: 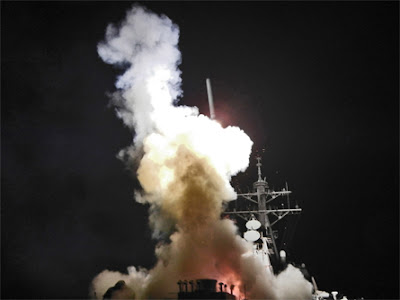 (Image:  Tomahawk missiles launched from a US warship)
Two days after the UN imposed a no-fly zone over Libya, American and British warships launched a cruise missile strike, while French warplanes began patrolling the Libyan skies.
From the Washington Post (WaPo):
http://www.washingtonpost.com/world/international-coalition-launches-strikes-on-libya/2011/03/19/ABlT8bw_story.html?hpid=z1
From Yahoo News:
http://news.yahoo.com/s/ap/us_us_libya
From the Seattle Times:
http://seattletimes.nwsource.com/html/nationworld/2014544135_apususlibya.html
“We have every reason to fear that, left unchecked, Gaddafi will commit unspeakable atrocities,” Clinton said in a Paris.
Maybe establishing a no-fly zone will help Libyan rebels.  However, someone should inform Hillary about that unspeakable atrocities weren't prevented in Bosnia and Iraq (under Saddam Hussein), when no-fly zones were established over those countries.
Posted by Ted Henkle at 10:10 PM