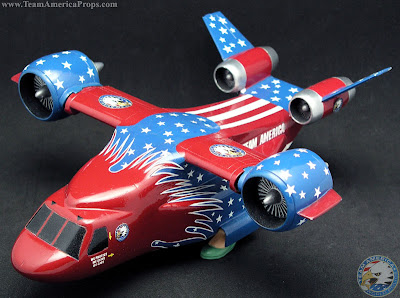 (Image:  The Team America Osprey)
...well, sort of.
While the Fukushima 50 continue their valiant efforts to cool down their reactor, the UN Security Council votes to establish a "no-fly zone" over Libyan airspace.  Such a tactic hasn't worked in the past (see Bosnia and Saddam Hussein's Iraq), but hey, it's worth one more try.  Right?
From FOX News:
http://www.foxnews.com/politics/2011/03/17/seeks-resolution-authorizing-wide-range-strikes-libya/
One of my on-line friends sent us these scathing, but accurate remarks:
I hate to say it, but it seems like we're going to get the worst possible outcome here: we'll impose a no fly zone and air strikes too late to change the course of the conflict (which I have doubts would've been effective anyway short of killing Qa-daffy outright, but whatever).  Then, when Qa-daffy is secure on his throne, we'll look like the impotent, wishy-washy, Euro-do-nothings that we have become.

Now, if Qa-daffy nails some ships or planes in the Med, all bets are off and he's toast. He's crazy, but not stupid enough to invite direct attack like that. He's winning and a no-fly zone will do little more than stave off a complete collapse in rebel morale.  Anyone remember how the rebel leadership said they did not want a no-fly zone a few weeks ago? Funny out that changed.

Also, while I'm ranting, do we even have a policy? The Sec Def says no way to any action; Sec State says not only a no fly zone, but airstrikes. The President says "Qa-daffy must go" then goes on radio silence. WTF? This is not amateur hour any more - it's a freakin' free for all!

I'm sure Obama will make a statement from Rio about all this, or maybe between the 13th and 14th hole.
﻿
Posted by Ted Henkle at 9:32 PM