Sore-losing leftist are Hell-bent on sucking the fun out of the arts and entertainment, along with every public and televised event.

The 60th Annual Grammy Awards was held this past Sunday (28 January) was--predictably--no different.

But for all the politically-charged fire & fury, the show's ratings tanked to a potential all-time low.

I think the last time I watched an awards show was the 76th Academy Awards, back in 2004, when Lord of the Rings: Return of the King swept the Oscars and just about every other award for 2003.

I've also "taken a knee" over professional football because I'm disgusted with the players' refusal to stand for our National Anthem.  So I don't plan on watching the upcoming Superbowl LII.

Diogenes' Middle Finger issued a great slam prior to the Grammys:  Just because we pay you to entertain us doesn't mean we're anymore more interested in your opinion now than when you were waiting on tables.

I'm currently writing this on the eve of another event I don't plan on watching:  The Peoples State of the Union, in which Bolshevik Bernie is getting-in on the act.

I'll probably spend this Sunday composing a blog post about both States of the Union during the Superbowl.


A couple days ago, Our Grand Nagus signed a bill ending the government shutdown--until 8 February.

The critical issue was:  Democrats wanted to keep our borders open to illegal immigrants...

...while Trump was willing to deal--if Democrats approve of building The Wall along the US-Mexican Border.

The Dems refused, but Chuck Schumer shut down the government for no reason.

But of course, people like former DNC Chair tried putting a spin on why they support illegal aliens over American citizens.

It appears the Democrats caved simply because they felt--quite rightly--that public opinion was turning against them.  Although many aren't happy with Schumer's cave-in.

Now the Republicans aren't blameless in all this mess either.

They've had a majority in both Houses of Congress since the 2016 Election--and they're still having trouble, or are reluctant to fulfill their collective campaign promises.  Like repealing Obamacare.

We'll see if a permanent-ish budget bill is passed more smoothly in a couple of weeks.

Somehow, I doubt it.

Posted by Ted Henkle at 4:30 AM No comments:

"No One Voluntarily Moves to Haiti"

Last week, Our Grand Nagus allegedly asked:  why are we allowing people from shithole countries to come here?

Which to us like-minded folks is a good question, and helped propel Trump to the presidency in 2016.

However, the lamestream had a meltdown that was a sight to behold.

The mass-hysteria wasn't limited to the news networks either.

The triggering wasn't limited of cyberspace virtue signalling either.

One day at the gym, a handful of elderly men were complaining about how Trump "shouldn't say things like that."  Then they carried-on like Hollywood celebrities pondering the possibility of moving to Australia or New Zealand.

Funny how they didn't wax poetic about moving to Haiti.

But as Mark Steyn points out in the led video--no one voluntarily moves to Haiti.  Or any other dysfunctional country, for that matter.

Paul Joseph Watson called out the bloviating lefties who won't be booking holiday packages to Haiti any time soon.

Brittany Hughes called out the same lefties for their nauseating, drummed-up moral outrage, especially when they call America a shithole all the time.

And finally, here's Megan Fox with her Top 10 Shitholes Nobody Wants to Visit--bloviating lefties.
Posted by Ted Henkle at 5:00 AM No comments:

Oprah's Possible Run for the Presidency


Oprah Winfrey's acceptance speech at last Sunday's Golden Globe Awards, ignited a firestorm of speculation as to whether or not she'll run for president in 2020.

Leftists are excited to no end about the idea of an Oprah Administration.

A couple of years ago though, they were screaming helplessly at the sky...

...but somehow times have miraculously changed.


As Kurt Schichter, and others, have pointed out:  All the other Democratic candidates are even worse.

One of my on-line friends asked:  If she gets elected, does that mean we'll all get new cars?

Probably not, but here's one item we can count on getting:


There's some divergence of opinion as to whether Oprah's speech as good or bad.

Mark Steyn said she was, by far, the least idiotic person at that awards ceremony.

That may be, but Ben Shapiro debunked her talking points, along with weighing the strengths and weaknesses of Candidate Oprah.

The buzz-phrase in Oprah's speech that drew the most ire from conservative commentators was "...your truth."

But as Brittany Hughes pointed out:  There's no such thing as "your truth."

Ben Shapiro's tweet as along similar lines:  There's the truth, and your opinion, along with several reasons why Oprah cannot be president.

And one of the biggest reasons, and a scandal just about every commentator has mention at least in passing. is her association with Harvey Weinstein.

Nearly four years ago, the Oso Mudslide caught nearly everyone by surprise.

Everyone, that is, outside Snohomish County.

Since then, landslide reporting has become a major issue here in Washington State.

Last month, I was on duty when a representative from Yakima County's Department of Emergency Management called to warn us about the unstable condition of Rattlesnake Ridge.

It's now speculated that the potential landslide could be worse than officials expect.

Back in 2014, I came on duty three full days after the Oso Mudlside occurred.  Our agency, WA State Department of Emergency Management, was fully activated and our Emergency Operations Center was still frantically busy.  If I recall correctly, we remained activated until nearly June of that year.

None of us at our agency want to go through that again.

And more importantly, the residents living near Rattlesnake Ridge don't want to experience a landslide first-hand.
Posted by Ted Henkle at 4:00 AM No comments:

Email ThisBlogThis!Share to TwitterShare to FacebookShare to Pinterest
Labels: Emergencies in the News, Local News, Personal Anecdote, Science and Technology

All the News Fit to Suppress


For the past several days, Iranians have protested against their ruler, vowing they're ready to die for a regime change.

While I was on-duty, the only station airing these stories was Fox News.

But, the discord in Mullahland isn't the only tidbit that wasn't considered newsworthy:  Here's what the lamestream media "missed" throughout last year.

Oh sure, there were events that got a mention-or-two:  The Top 10 Underreported Stories of 2017.

While the Iranian protesters may be glad Our Grand Nagus is president...


...leftists in-general, and the media in-particular, are still fuming the Corrupt Queen Hillary robbed of her rightful crown.

Their perpetual hatred towards Trump the Usurper makes one thing clear:  America's left is in the grip of insanity.

Meanwhile, many of us like-minded folks are glad there's a "new sheriff in town."

Despite Our Grand Nagus' faults, and the troubles we face, both inside and beyond the Ramparts of Civilization, there at least won't be any Apology Tours for the next few years. 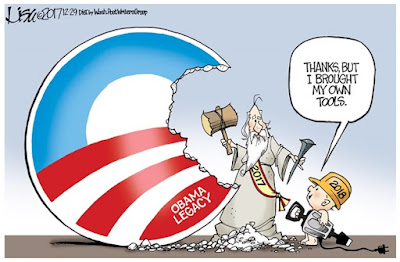 Well, 2017 certainly had it's fair share of highs, and tragic lows.

Rather than dwelling on all the hardships and heartaches, Erika Haas points out the seven biggest conservative wins of 2017.

I'm sure how I feel about the tax break.  On the one-hand, with our $20 million+ deficit, I wonder if cutting the government's tax base is such a good idea.  But on the other-hand, the government wastes so much money it doesn't deserve additional funds to squander on stupid stuff.

Plus it's fun watching triggered leftists--the same ones who ramrodded Obamacare down everyone's throats--rant about the impending ecopocalypse.

Greg Gutfeld and his crew feel that overall, 2017 was a good year.

I hope last year was a good one for all of you reading this post.

Does that mean things will be smooth-sailing in 2018?

Not by a long shot. 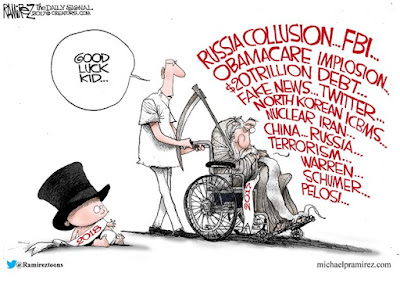 But at least I feel more confident about how our country faces the issues that lay ahead.