A few days ago the Robert Mueller testified before Congress in what the Dimtards hoped would be a slam-dunk conclusion that Trump the Usurper colluded with Russians to steal the 2016 Presidential Election from Crooked Queen Clinton.

It was a slam-dunk all right...

Mueller's muttering shattered the Dimtards hope of booting Our Grand Nagus out of office before Election Day 2020.

And this conclusion isn't from right-wing politicians and media.  Tim Pool pointed out that several leftists agree that Mueller's testimony was a disaster for the Democrats.

There's more content on this topic, but quite frankly I'm tired of hearing about RussiaRussiaRussia.

And I'm not the only one:

I got off night shift the other day. Apparently, while I slept there was another Congressional hearing about the on-going, resistance against the reign of Trump the Usurper.From what I gather, it had something to do with...a Russian pornstar's tax return....?I think...I could be wrong...it's all a blur. The Resistance Narrative is confusing at the best of times, let alone when one is sleep deprived

Ganging-Up on America's Gang of Four


It looks like the flame-war between Our Grand Nagus and the self-appointed Dimtard "Squad" will continue through the 2020 Presidential Election.

And beyond, if Trump the Usurper gets re-elected.

Despite all the media "glamour shots," members of America's Gang of Four are unpopular, even among Democrats, outside their respective districts.

Oh they may be young and attractive, but their ideas are about 171 years old.
(Marx's Communist Manifesto was written in 1848).

Despite The Four Harpies of the Apocalypse's quest to bring about some Islamo-Communist Worker's Paradise of Amerika...

Since we live in Clown World, I'll have to add some sort of disclaimer as to why I don't like the Dimtard's JV "Squad." 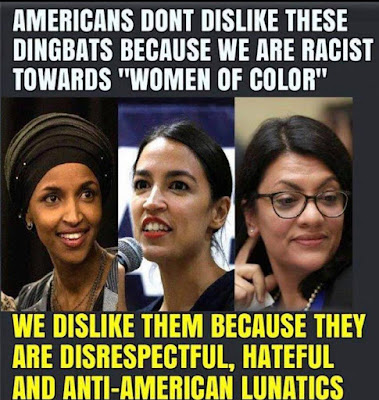 Of course, like in the dystopian game, Warhammer 40,000 innocence proves nothing.

Vincent James pointed out that the motto America--Love It Or Leave It has been around long before the today's "Woke Era."

Make no mistake, The Four Harpies of the Apocalypse are out to destroy radically transform American society.

And the useful, idiotic SJWs will help them.  Their plans and actions come right out of the Saul Alinsky Playbook:


As Sargon of Akkad points out: The Squad wants to redefine the [political] table, along with providing a timeline of the he said--they said events.

On Sunday, Our Grand Nagus re-iterated:  We're dealing with people who hate our country.

Liz Wheeler recommends chanting:  Vote her[Ilhan Omar] out! instead of "Send her back!"

But no matter.  All we'll hear from Dimtards, along with their snowflake and SJW minions is the hue & cry of "racist," especially since a third of Dimtards think it's racist to even criticize their "Squad."

According to Tim Pool, at least one House Dimtard conceded Trump won this one.

While Our Grand Nagus might be safe from impeachment--after years clamoring from Dimtards.

Instead, they'll continue to play The Race Card against Trump--and his supporters.


A couple days ago, Our Drunk Dialer in-Chief ignited a firenado on Twitter.

Basically, he vaguely referenced "The Squad," that if they don't like America, then can go back to their home countries, fix them, then come back here and show us how it's done.

I prefer to call them The Four Harpies of the Apocalypse.  Their past comments are highlighted in A.F. Branco's cartoon above.

Our Grand Nagus conducted a follow-up press conference explaining in detail what he meant.

As Gregg Gutfeld asked:  What kind of racist would invite someone back?

Sargon of Akkad noted no one in the Twitter mob could not explain how Trump's comments were racist.

Despite the Four Harpies' true birth origins, Bill Whittle pointed out that they may have been born here, but they're un-American.

But don't just take the word of white, male commentators.

The Amazing Lucas demanded people to stop using this word!

And Anthony Brian Logan points out how the media misquoted Trump, while detailing who among the Four Harpies were foreign born.

While YoungRippa59 says he's been told to move to Africa--by leftists.

Despite the hue & cry over alleged racism, a few commentators think this is another "4D Chess Move" by Trump.

Tim Pool:  Leftist media think they exposed Trump but still get played for fools, with a follow-on Democrats falling into Trump's trap and throwing the House into chaos.

Prior to this flame-war, Commissar Cortez and her squad-mates were crashing Pelosi's Party.

Would it have been better to let the Dimtards eat their own?

I never mastered the standard game of chess, let alone 4d chess machinations.  But one thing I've observed about the Dimtards is, ideologically, there's very little difference between any of them.

They all want the same goal:  Total Socialism.

The difference between the old, Pelosian Dimtards and the Four Harpies of the Apocalypse is one of methodology.

Pelosi and her allies wanted to "boil the frog one degree at a time."

The Four Harpies want to flash-fry everything.

The Good News is, according to Styxhexenhammer666, Trump's Master Plan worked.

The Bad News is, House Dimtards are now fast-tracking impeachment action against Trump the Usurper.

While impeachment may actually get underway, I think Our Grand Nagus has a few more 4D Chess moves up his sleeve.

Posted by Ted Henkle at 2:00 PM No comments:

Nation-wide protests at ICE facilities occurred over the weekend in the wake of leaked info from one or more Deep Staters of impending raids against illegal aliens.

The most infamous one took place in Colorado, where anti-ICE protestors hauled down the American Flag and hoisted a Mexican Flag and a vandalized Blue Lives Matter Flag.

Nikki Hailey called-out the Dimtards for their disgusting silence on this, which back in the days of yore was considered treason.

I wasn't ready to write a blog post for today, but a close friend passed on the news of a man shot and killed while attempting to set fire to a detention center here in Tacoma, WA.

In a manifesto written before his one-man attack, he claimed I am ANTIFA.

I still wasn't going to do this impromptu blogpost, until my friend brought up this point:

Yeah, how 'bout that?

Where's the hue & cry from the Ministry of Truth and Dimtards over more gun control?

Don't worry...The media blackout will take care of this.

Followed by this joke:

Thank goodness for the memory hole.

But as long as alternative news sources can dodge complete censorship, you can't stop the signal.

In the Clown World we now live in, we can continue to expect that the minions of the Ministry of Truth are big defenders of ANTIFA.

Posted by Ted Henkle at 3:30 PM No comments:

But because of the repugnant behavior by the co-captain, Megan Rapinoe and some (all?) of her teammates I can't even rouse myself for a Monty Python "...and there was much rejoicing..."

Like American football, soccer (or football as the rest of the world calls it) is now woke and is now one less activity or event for normal Americans to enjoy.

As far as me and Stephanie Hamill are concerned, Megan Rapinoe is no hero.


Better yet, as Ben Shapiro said, she's completely obnoxious. while Salty Cracker points out, Megan Rapinoe is the team's co-captain and that no one knows who the other one is, or as Bill O'Reilly put it:

In addition to her not going to the "...fucking White House..." comment and her unwillingness to meet with anyone who disagrees with her, she's got her team and fans whipped-up into an "equal pay" frenzy.

However, just like the "gender pay gap" that supposedly exists in far less glamorous jobs, according to the Factual Feminist, the apparent pay disparity is due to market forces based on revenue and viewership.

In conclusion:  The US Women's Soccer Team can't handle their world cup victory. 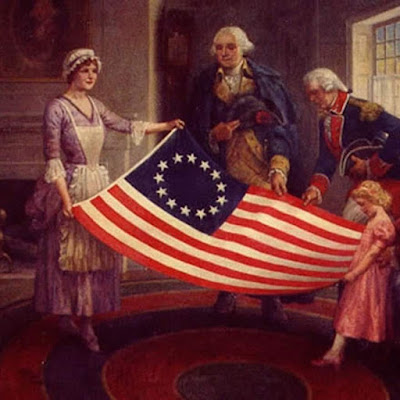