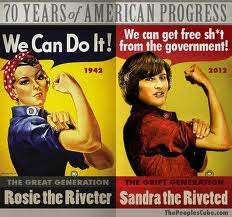 A few days ago, Time announced that Sandra Fluke is in the final running for Person of the Year.  Yesterday she was invited to speak at the Women in Entertainment Breakfast.
I wonder what she'll talk about? 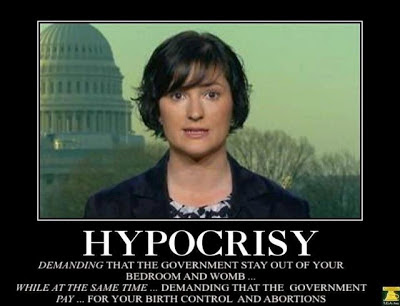 While it can be easy to dismiss, or mock Ms. Fluke's hypocrisy, Charles Johnson warns us not to, because she's a professional activist.
And speaking of professionalism, another women's rights group is auctioning a 1-hour strategy session, with her.  It took less than a day for this double-entendre laden article to appear in The College Fix.
Which of course, led to even more double-entendre laden comments from my friends:
This one is just beyond self-parody. I could see hourly rates, alright. I wonder if she can do that thing with the silk handkerchief with the knots in it....?
I wonder if the government is covering Sandra’s anti-virus software and firewall protection for her Skype session. If not, I smell another activist opportunity for her.
That's not the only anti-virus help she needs.

Whether or not Ms. Fluke needs protection, her and her friends could have benefited from a class in logic... 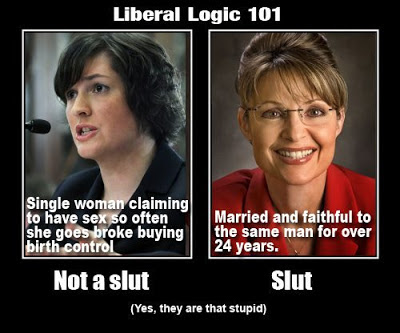 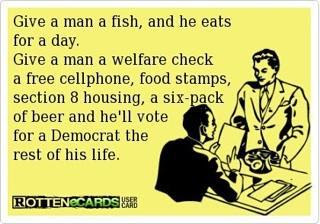 You have to ask yourself:  Are you a freeborn citizen of a republic, or a subject of the state?

Posted by Ted Henkle at 5:00 PM No comments: 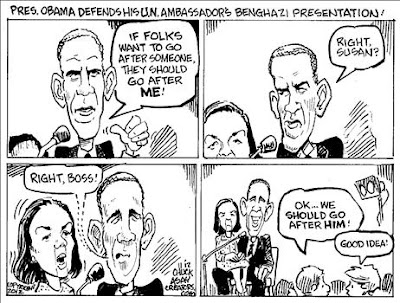 (Image by:  Chuck Asay)
There is great concern among conservatives that Obama will nominate Susan Rice as Hillary Clinton's successor in the Department of State (DOS).  A few days back, nearly 100 senators objected to the idea of Rice being considered.
Rice's knack for cronyism dates back a couple decades with the "let's-not-call-it-genocide" genocide in Rwanda.
But of course, to criticise Madam-Almost-Secretary Rice is considered racism.  The left-wing/mainstream media is already banging their tamtookas over this and it is feared these same Republicans may cave on the issue.
Matt Vespa discusses how to decipher Rice without being racist, but I personally don't think the idealogues will listen to logic.
At least Mark Steyn injects some humor in to this gloomy prospect:  Nominate Jill Kelley for Secretary of State.
Who knows?  She probably couldn't do any worse than Rice or Clinton, not to mention a general, or two... 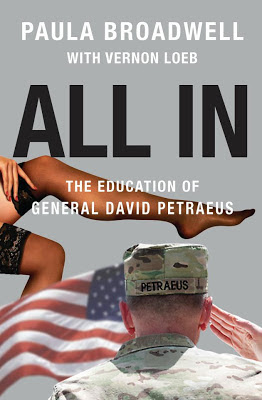 Posted by Ted Henkle at 6:00 PM No comments: 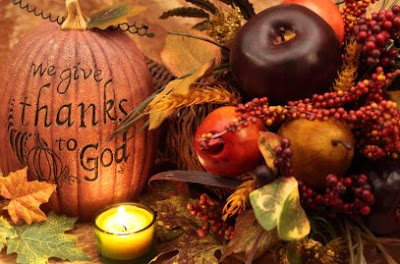 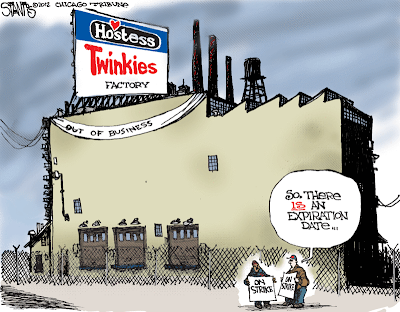 (Image by Santos)
While I was out of town for the past few days, Israel and Hamas began exchanging fire, then a cease fire was implimented--which Hamas violated within hours.

And thanks to the Ministry of Truth, it looks like Obama and his gang will get away with having to answer for Benghazi. VDH discusses Obama's tangled web.
But, just as I was leaving for my trip on Friday (16 November), the big story broke:  Hostess was closing for good.
That means no more Twinkies, Cup Cakes, Fruit Pies and my favorite:  Ding Dongs.
All over America there were scenes like this at stores and bakery outlets... 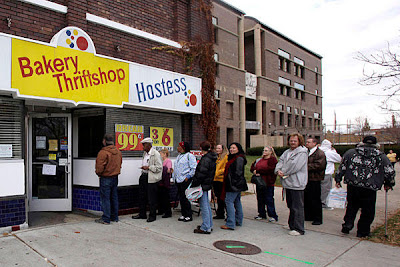 ...with Twinkies and other treats flying off the shelves and even being sold on e-Bay. 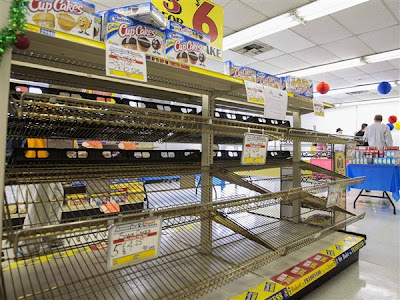 Hope for some mediation was dashed today, when a bankruptcy judge approved the closure.
As one of my on-line friends said:
Well, labor and the left did what a nuclear war could never do -- they destroyed Twinkies forever.
So what does the demise of Twinkies have to do with the sad state of affairs?
If things continue on the present course, more than half of production will go to the government.   Provided we survive the fall off the Fiscal Cliff.
Mark Steyn rolled-in with his Twinkie Offensive and still being able to import Twinkies from Canada.
For the time being.
Posted by Ted Henkle at 5:58 PM No comments: 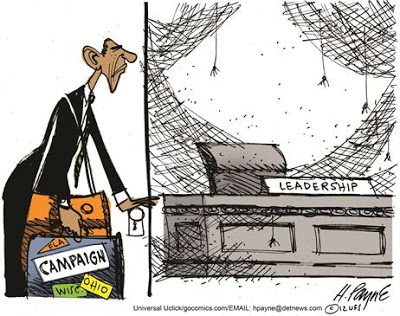 (Image by Henry Payne)
...there's a few items Our Dear Leader's regime didn't think worth mentioning to us serfs, while he was campaigning.  Victor Davis Hanson (VDH) informs us on some of the things they "forgot" to tell us.
But hey, as long as the Obamatrons are in their happy place, there's nothing to worry about.  Right? 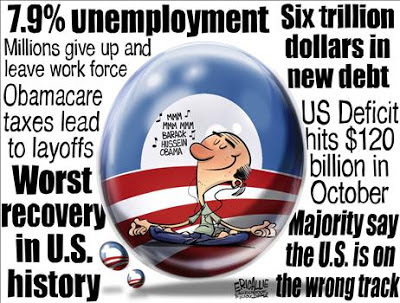 (Image by Eric Allie)
Posted by Ted Henkle at 1:54 PM No comments: 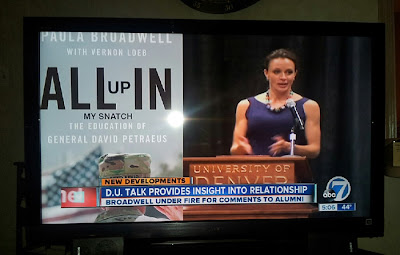 (Image from:  Denver Westworld)
Well it didn't take long for the Patraeus Affair to achieve the levels of a sex-comedy.  A couple days ago, 7News in Colorado ran it's take on the scandal.  What made this 5 O'Clock News Show unique is someone in the station inadvertently snagged a spoofed title of Paula Broadwell's book, All In.
The graphic which aired, was titled:  All Up In My Snatch.
Now every time I think of Ms. Broadwell's book, I remember the spoof title over the original.
However, this whole scandal is no laughing matter.  Even Mark Steyn's tongue-in-cheek comments about the missing piece of the puzzle and "diplomats" in Tampa cover some scathing criticisms.
And since Patraeus is tied to Benghazigate, some folks--primarily congressional Republicans, FOX News and conservative news sites--want to know if the, now-ex, CIA Director was leaned on in any way by the Obama Administration to spout the party line about the cause of the attack.  That for the two weeks after the attack, it was considered a "spontaneous reaction" to the cheezy Mohammed film.
Charles Krauthammer wonders if the affair was held over Patraeus' head for favorable testimony about Benghazi.
While Bill Kristol says a source informed him the not-so good general "...wasn't completely honest in his Benghazi briefing to Congress."

Today's breaking news is that Ms. Broadwell may have a significant amount of classified material on her computer.


Some comments from my friends include:


Glad to see Obama's second term is starting off so well. At this rate, he'll be nuking a third world country soon in order to change what the media is talking about.
I’m not so sure I buy the angle of the Benghazi testimony link with the Petraeus scandal. I know enough (good and bad) about him to know he would not really agree to alter his views in congressional testimony on operational matters to placate the White House. However, I have the sinking feeling that the White House knew enough of the scandal’s details three or more weeks ago—including Petraeus’ intention to offer his resignation and the President (and/or his political advisors) told him to “hang tight” until 11/07. That thought really chaps me.
I'm merely enjoying some post-election schadenfreude -- my sympathy for Allen and Petraeus is pretty minimal, given they are supposed to be smarter than that. My sympathy for the Obamunists is on the south side of zero.
I’m really starting to believe that maybe people DO get the government they deserve. Apart from those of us who didn’t vote for him, that is.
Posted by Ted Henkle at 1:22 PM No comments: 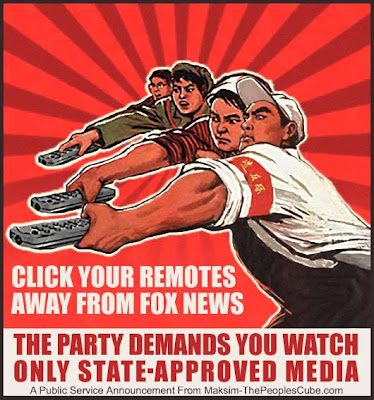 The War Against FOX News, may slow down to a network version of low-intensity conflict.  But as most young folk voted for Obama, they did so while tuning in to MSNBC.
According to Dashiell Bennett of the Atlantic Wire, MSNBC outdid FOX in "...key 25-54 year old demographic..."
If true, then we'll be hearing more Big Lies like:  "It's all Bush's fault, the Republicans are a white's only boys club and consevativism = racism/sexism/homophobia/Islamophobia, etc."
Then the only things needed are additional regulations and executive orders--all for the sake of "fairness"-- to be implemented and our path to a state-run media/Ministry of Truth will be complete. 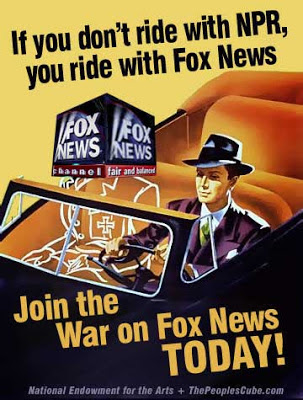 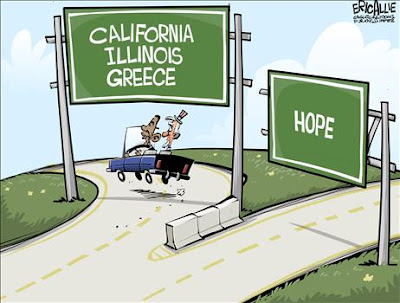 (Image by Eric Allie)
I stumbled across an article by Walter Shapiro on Y! News yesterday, while checking my e-mail.  I'm not sure what side of the political aisle Mr. Shapiro sits, but I found his article on the "Second Term Curse" to be rather even-handed.
That is, provided we make it through a second term of Obama.  The Fiscal Cliff is less than two months away and Mark Steyn writes on how unfazed the Electorate was about looming reality.  In a follow-up piece he discusses the consolations of denial among the masses.
When it all comes crashing down.  I wonder who Our Dear Leader is going to blame? 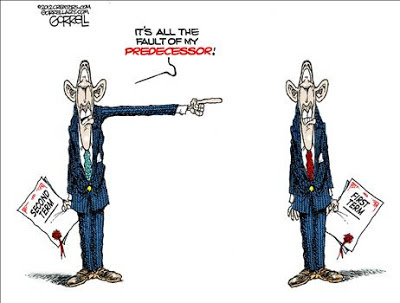 (Image by Bob Gorrell)
Posted by Ted Henkle at 1:00 AM No comments: 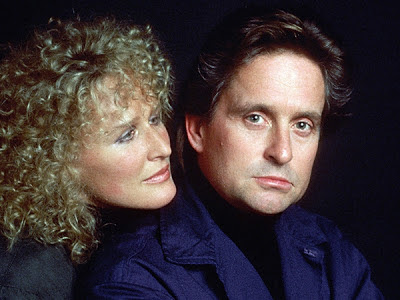 (Image:  Glenn Close and Michael Douglas in the movie Fatal Attraction)
On Friday 9 November, the Director of the CIA, General David Petraeus, resigned on the grounds of having an extramarital affair.
His fling supposedly started within a couple months after assuming the role of CIA Director. If so, then he may be able to avoid prosecution under the UCMJ.
If the general thought he'd make a quiet exit prior to the congressional hearings about the attack against the Benghazi Consulate on 11 September--he was wrong.
The explosion from this political bombshell is still reverberating throughout the Corridors of Power.
Congress wants answers.  Especially if any part of national security has been compromised.  Even information about the Benghazi Consulate attack.

Where this will lead to is anyone's guess.  But as Katie Pavlich wrote in Townhall, things will get uglier.

They often do, which leaves the philanderer open to ridicule... 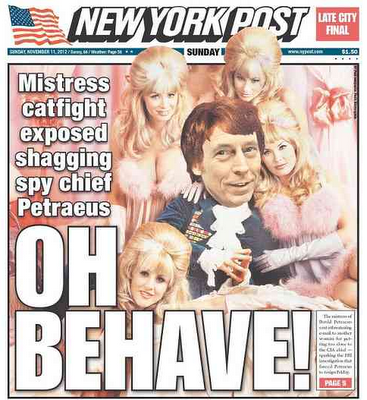 Posted by Ted Henkle at 9:00 AM No comments: 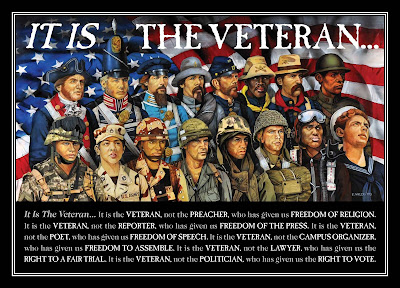 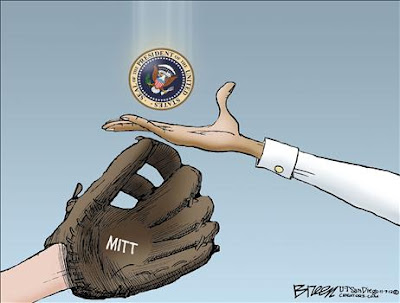 (Image by Steve Breen)
Well, the 2012 presidential election sure didn't turn out the way 48% of us wanted it to.  FOX News has the Election Night Results.  Meanwhile, here in WA State we're still trying to figure out who the next governor will be.
So, what happened?
There's a lot of "Wednesday Morning Quarterbacking" on what Team Romney shoulda done, but for the moment, here's some FOX News exit poll statistics to explain how we managed to "download Obama 2.0."
And Tony Lee, illustrates Obama's classic classic divide and conquer strategy.
But all is not well in Obamerica.  While liberals/Democrats celebrated, the Stock Market plunged.
Prelude of things to come? 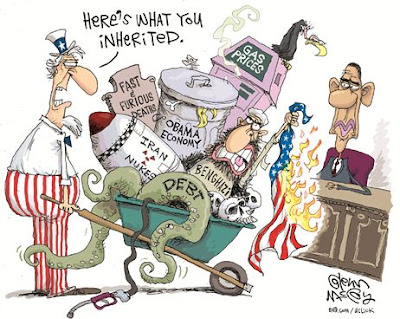 (Image by Glenn McCoy)
To about half of the voting public, they don't care about any of the big issues we face as a nation.  Bill O'Reilly was spot-on in his prediction last night, when he said most people simply "want stuff."

Now that "Obamaclaus" has been re-elected, we'll see what the next four years bring. 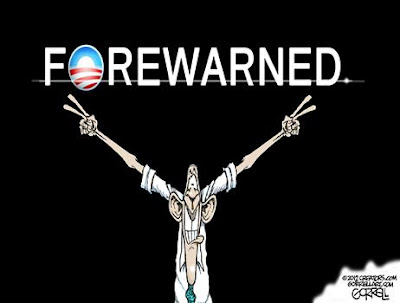 (Image by Bob Gorrell)
Posted by Ted Henkle at 5:06 PM No comments:

Benghazi, The Election and Sandy 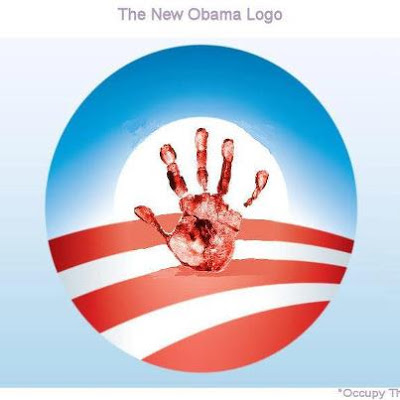 New Yorkers, especially Staten Islanders, along with others on the east coast continue their struggle of returning to normalcy.  Sadly, some families never will.
Meanwhile, the presidential election draws ever nearer.  Unlike Obama's continuous presence before, during and after Hurricane Sandy... 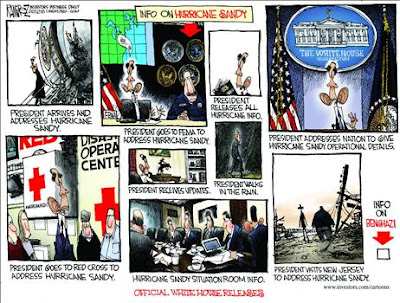 ...there is, to all intents and purposes, a media blackout over the 9/11/12 Benghazi attack.  Diplomad rolls-in with warnings of increasing unrest in the middle east, if we don't alter our dysfunctional foreign policy.
A change of administration may help.
In the wake of Sandy's destruction, my friends and I predict Tuesday's election will be prolonged in some way, most likely difficulty in counting votes.  Theo Caldwell, predicts a Romney win--along with a slew of storm-related conspiracy theories.
I think this comment from one of my on-line friends is spot-on about liberals in power:
The Left is only truly happy when they are in opposition. Actual leadership is icky, requiring hard and sometimes morally ambiguous choices, and it opens one to attacks. Being on the outside better fits with their moral certitude that, "if only they were in charge, everything would be unicorns and rainbows" -- they remain mired in the 60s mindset of protest against "the man" and are uncomfortable being "the man."
This "...leadership is icky..." results in the unseriousness the Obama Administration has when it comes to governing.  Mark Steyn ties this all together by point out that The Biggest Big Governement Can't Keep The Lights On.
Posted by Ted Henkle at 7:30 AM No comments: