Shades of Adversity in College Testing


A few months ago, news broke of celebrity parents trying to short circuit the admission processes so their darling offspring could attend top-tier schools.

This time,  the College Board which administers the Scholastic Aptitude Test (SAT) board decided to add an Adversity Score to each student's final test result.

While The Amazing Lucas tried to produce an fair & balanced report on this matter, but I think he gives too much credit for the supposedly good intentions of this new program.

Instead, I'm inclined to agree with Tim Pool's assessment that this is overtly racist and will be wide open to fraud.

While the good intentions may be to help underachieving black and Hispanic kids' SAT scores, it's a way of punishing white and Asian kids because of their perceived privilege.

So much for MLK's dream of our children not being "...judged by the color of their skin, but by the content of their character." 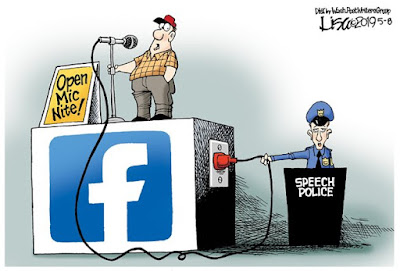 While an American Navy carrier group, steaming to the Persian Gulf, and now threatened by Iran, "Fakebook" continues with its community standards censorship policy.


The social media monopoly locked-out/wiped out several hundred followers of on-line commentators, nearly all in a guilt-by-association.

Tim Pool's follow-up video demonstrates that Facebook mouthpieces lied about weeding out extremists.  One can still find terrorist and extremist content, but conservative pages are being deleted.

So, as Tim said in his second video--it's political--and they flip-flop between claiming their either a "platform" or "publisher," depending on what's most advantageous to the company.

That is, until I ever run afoul of their community standards commissars.

There is no quick fix with about a billion followers hooked on social media.

But the idea of breaking up monopolies has been done before.


On Thursday evening (2 may 19), just before going to bed, I watched Paul Joseph Watson's video announcing he along with several other conservatives have been banned by Facebook and Instagram.

Oh and Louis Farrakhan was purged for being a "right-winger" for good measure.

Which is probably why I couldn't sleep that night.

As I mentioned to a couple of friends, I prefer to catch my news on YouTube instead of watching the networks--even FOX News.

I tend to do most of my news watching while I'm no duty.  It's part of my job with emergency management.  However, I'm not keen on watching commercials, or waiting for the news program to run it's course before it gets to the story I really want to watch.  Which more often than not, I get an incident report that I have to respond to, so I end up catching the segment on YouTube later.

With my YouTube viewing experience I'm well aware of complaints from conservative contributors about demonitization, having searches for their sites misdirected due to "adjustments to the algorithms," and shadow banning.

Now the leftists running the Big Tech companies have stepped out of the shadows.

The following day most of the on-line print formatted media was still focused over the Democrats still braying over AG Barr and that he and Our Grand Nagus were guilty of--something.

At the time I was writing this post, the news was still confined to YouTube.  Several other YouTubers chimed in-on the "Fakebook Purge."

I don't think he's exaggerating either, especially when someone's ability to conduct on-line and even real-world financial transactions are being disrupted or terminated.

This latest round of censorship was just one story on Ben Shapiro's Show (starting at the 5:59 minute mark).

Nor were these YouTubers card-carrying conservatives.

Tim Pool, who defines himself as a liberal, considered this a terrifying escalation of censorship, and warned that after banning conservative sooner or later, those in power will ban anyone who runs afoul of them.

Nearly all the commentators quoted, or alluded to Martin Niemoller's First They Came For... poem.

Which is frighteningly appropriate.

Meanwhile, the talking heads on the non-FOX News networks thinks it's a great idea that their political-social opponents are being silenced.

What such libtards don't realize is that if this trend continues:  They'll be next.

Paul Joseph Watson posted another video in response to Our Grand Nagus tweeting his support.

And I missed The Red Elephants' video, which was posted last night, about Purge of Conservatives.