Turmoil Over Trump's Trip to Troops


Okay, I know I went overboard on this post's alliterative title.  But I couldn't think of another story that qualified as an End-of-Year-What-the-Fuck, than Our Grand Nagus' surprise visit to our troops overseas.

The basic timeline was this--

--Then on the day after Christmas, when Our Gran Nagus showed up unexpectedly in Iraq, they lambasted him for visiting the troops.

Here are some examples of the symptoms--

--The cabal at CNN called Trump The Grinch Who Stole Christmas (I'm surprised they didn't say "The Holidays").

--There was the claim that Trump the Usurper violated ethics and campaign laws.

--And anytime Our Super-Model-in-Chief goes on such outings with her hubby, she comes under fire from misogynist, hypocritical commentators (personally, I think they're jealous she so stunning, classy and accomplished).

--Tomi Lahren pointed out that the Left hates that our troops love Trump.

--Jason Chaffetz, subbing-in for Sean Hannity, reminded viewers about the media silence when Obama signed personal items for the troops.

--I like how Mark Steyn compared the FOBs (Forward Operating Bases) as dreary Crusader Forts.

--David Cullen could see this latest round of Trump Derangement Syndrome all the way from his home/studio in Ireland.

To finish this post in a flourish, one of my friends posted Curt Schilling's scathing retort to a triggered Ken Fitzgerald: 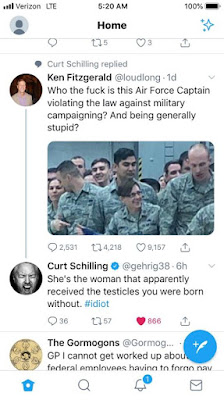 
When the bells tolled midnight (EST) this past Friday, about a quarter of the US Government shut down.

The impasse between Democrats and Republicans over funding the border wall between the US and Mexico.

Yeah, right.  I guess this "real border security" kicks in when a arrested and deported more than 10 times.  That and the "Dimocrats" would rather pick a fight with the DHS Secretary (and threaten further scrutiny once they assume control of the House next month).

Now to be fair, the Republicans had to be cajoled into supporting the border wall funding.


There's been so much feet-dragging that the fiery Ann Coulter called Trump a gutless president in a wall-less country.  (Keep in mind Coulter was one of the earliest to predict Trump's rise to the presidency).

She wasn't the only one.  Michelle Malkin also slammed the GOP for wimping out on the wall.

At least the Republicans pretend to care about real border security.

Mark Rubio made an apt analogy by comparing the border security to TSA's airport security.

Which is something commentator Mark Steyn has been sounding off about for years now.  That instead of encasing public/tourist areas in bollards and barricades we extend the barricades to the border.

Of course the Ministry of Truth has blamed the Tyranny of Talk Radio (and FOX News) for the shutdown.

But Liz Wheeler pointed out that just over half of the American people want a border wall.

And Tucker Carlson explained that Democrats have stopped caring about the American people in order to gain permanent political power.

Gaining an maintaining power behind their own gated communities.

The Diplomad suggested anyone against the wall should live in a door-less house.

Democrat politicians aren't the only ones wanting to open the City Gates to the invaders.  Social Justice Whiners (SJWs) and snowflakes are throwing in their lots with the illegal aliens.

A GoFundMe campaign has raised $60K to buy ladders for illegal aliens to use in scaling the border wall.

At least there's a Christmas Miracle in response to the collaborators' attempt to circumvent border security:  A GoFundMe campaign to build the border wall surged past $13M.

Let's hope that Our Grand Nagus does more this Christmas Season than "turn on the White House lawn sprinklers."

And that the government shutdown goes against the Dimocrats.


We're two weeks away from Christmas, and Social Justice Whiners (SJWs) have been as busy as Santa's elves concocting new ways to be offended.

Even the term "Christmas" can trigger a snowflake meltdown, and I'm not talking about the frozen water kind either.

Two years ago, Dennis Prager, who's Jewish, believes the change from wishing people a "Merry Christmas" to "Happy Holidays" is a significant development in our culture.

Not only is his observation true today, but it's intensified.

First off, feminists at an interior decorating magazine had visions of The Handmaid's Tale dancing in their heads when our Supermodel-in-Chief selected red Christmas trees for the White House.  Liz Wheeler told SJWs to get a life.

Then the Huffington Post claimed that the classic stop-action cartoon Rudolph the Red-Nosed Reindeer was racist.

While leftists are missing the point about Rudolph that hasn't stopped them.

One radio station in Cleveland had the "courage" to ban the song "Baby It's Cold Outside."

I find it ironic that the same leftists who brought us moral decay starting with "free love" in the '60s right up through today's "hook-up culture," are now our self-appointed moral guardians.

And while we're on the topic of song & dance routines, a NYT editorial found fault with the Big Apple's Radio City Rockettes.  (Spoiler Alert:  Too many white-girl performers, and too many white people in the audience).

It's not enough for SJWs to inflict a "death of a thousand cuts" onto our Christmas cheer.  Some Scrooges want to eradicate all symbols of Christmas--even the colors red and green, like this Nebraska elementary school principal. At least this story has a "silver bells" lining--the She-Grinch has been put on an involuntary leave of absence.

Not to sound pessimistic though, this may be a mere holding action.  The current batch of snowflakes attending indoctrination centers (formerly known as "colleges" and "universities"), think it's a grand idea to ban all references to Christmas from campus, lest someone is made to feel "uncomfortable."

The cartoon by Mike Lester I used for this post might seem out of place in regards to the topic.  It was the only one close enough to be considered suitable. When I Googled "War on Christmas political cartoons" all the images were by leftist cartoonist who considered the topic to be a fake news, storm in a tea cup that conservatives freak out over.  (And we know Google is run by leftists).

Yeah, go to a college campus, or public school, wish everyone a Merry Christmas, instead of Happy Holidays, and see who does the freaking out.
Posted by Ted Henkle at 4:00 AM No comments:

It was nice to see the Clintons, Trumps, and Bushes get along during the funeral, especially Dubya and Michelle O; while politicians set aside their partisanship to honor our 41st President--even for a moment.


However, there is a hint of hypocrisy from weeping leftists--the same leftists who vilified Bush the Elder when he was alive.

Or as Kurt Schlichter pointed out:  The only good Republican is a dead Republican.

But overall, he was a decent man and a decent president.

Too bad leftists didn't realize that when he was alive...