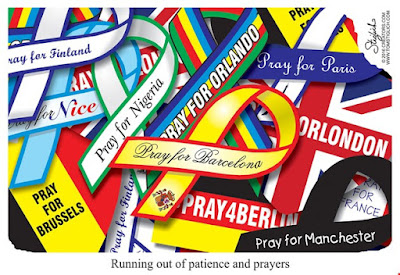 It's now virtually impossible for me to post about breaking news.  (Not that I really could before, because I'd often wait a day or so to allow most, if not all the facts to come to light).

It's been almost two weeks since the terrorist attack in Barcelona, Spain, and nearly a week since a Spanish judge ordered one suspect to be freed.

But even if I could post about events in a more timely manner, I don't know what else to add, especially since the attack on Barcelona followed the same tiresome trajectory as all the other attacks before it.

So much for Spain's umbrellas in the rain.  (That is, attempting to appease enemies for "peace in our time.")

According to The Diplomad's family, the Spanish are hell-bent on societal suicide.

A sign, maybe, of more and more people accepting the "new normal."

The Slippery Slope of Statue Smashing


The Memory Hole Madness--snowflakes triggered into becoming mindless statue smashers--spread throughout the week.

From the "rebel scum" states of the long time ago Confederacy, the pandemic has now reached the Peoples' Democratic Republic of the Big Apple.  Hizzoner Moff De Balsio is now placing the statues of Christopher Columbus under review.

Oceans are no barriers either.  Monument Madness has taken hold in Britain with the hue & cry raised to raze Nelson's Column.

One of Mark Steyn's readers points out there is no "discussion" about this topic, and statues are removed in a very undemocratic way.  Yeah, often in the dead of night too.

And VDH eloquently points out the Left's hypocrisy when it wages war against the [select] dead.

Here's an illustration of leftist logic for smashing statues (and stifling free speech)...


...which it makes them look as bad as our Islamo-fascist foes.


Yesterday, a free speech rally was cut short by counter protesters, just one week after the deadly clash between protesters and counter-protesters in Charlottesville, VA.

I haven't been able to delve into the story too deeply, so many (all?) of you probably know more about what happened than I do.

What I did notice though, was that the media, Democrats and even some Republicans are squawking about what Our Grand Nagus said or didn't say in his attempt to condemn the violence.

Also the Democrats and their media allies are trying to pin the entire blame on the right-winger protesters.  (The Five discussed the media's impact on Charlottesville).

And Mark Steyn returned to one of his recurring themes:  Less speech leads to more violence.

A couple of friends remarked these clashes reminded them of the riots between the Communists and Nazis in the days of the Weimar Republic.

Whatever the similarities are, the non-FOX News media has already chosen one side.


This past week has been a long and intense one at the agency where I work.  And things are likely to stay this way for the foreseeable future.

I also have a growing list of domestic projects I need to do, along with gaming projects I want to do.

But the news cycle, both fake and real, continues on.

There's a lot going on within our country...

Unfortunately, I no longer have the time to read in-depth about current events, let alone add my two cents to the subjects at hand in a coherent manner.

What I'm hoping I can do is post at least once a week.  I know I've often done this in the past due to my rotating work schedule, or going on vacations.  But this slowdown will more the norm than the exception.

I'm thinking of something along the lines of a Top Story of the Week, or Weekly Roundup of news, along with applicable, attributed political cartoons.  Or both, if I can manage it.

Either way, I'm not planning on signing off the air anytime soon.  Just needing to slow down the transmission rate.

Thank you for staying tuned to Station WTFO.
Posted by Ted Henkle at 5:00 AM No comments:

Prager U Video: The War On Cars

Before you go off  on that Sunday drive:  Check out this video of Lauren Fix explaining why Big Government, Environmentalists and Leftists in-general hate cars.  (Although they love virtue-signalling by driving electric cars, even though they're not as green as they're claimed to be).


A few weeks ago, my wife started in a new position within her company.  Unlike her old position, where she spent most of her time working from home, her new job requires her to commute to work.

She actually researched the bus and train routes between our house and work to see if taking mass transit would be better than driving, often in heavy traffic.

As it turned out, taking the bus would double her commute time.  On my own drives to work, I'd see poor souls standing in all kinds of weather by nothing more than a street sign indicating a bus stop.

For this post I even did my own investigating:  Taking the bus to work would take four times as long--and only during the times the buses were running.

Sorry lefties (well, not really) mass transit isn't for us.

So enjoy your drive--and your freedom!
Posted by Ted Henkle at 5:00 AM No comments:

Yesterday I posted how the leftist dreamy-eyed view of Canada is a "mirage."

Meanwhile, a nightmarish socialist experiment has been going south, south of the border.

Venezuela is being devoured by socialism.

One of my friends posted this great comment about the media's disinterest in the disintegration of yet another Workers' Paradise:

This is a story that doesn't get near enough attention: that all the chaos and violence and oppression going on in Venezuela is the result of a full-bore implementation of leftist policies.  I notice the media never delves into the root causes of everything down there - they just gloss over it and focus on the current disastrous situation with no explanation for how it got this way.

At least most of the members of The Five aren't glossing over things as they discussed the consequences of socialism.

But it's not just the media that love to fawn over socialism, even while, pretending to have "never heard of Venezuela".  Lefty Democrats wax poetic about the joys of so-called social justice democracy.

The problem is:  Democrats don't actually believe in Democracy.

Most of us like-minded folks feared that if Hillary were elected, the US would eventually (soon?) follow Venezuela into anarchy.


It's not just the fawning editors of the Rolling Stone rag mag either.  A lot of leftists are infatuated with the Great White North.

Kyle Smith point out how and why Canada is an American leftist's mirage.


Last week, it was announced that our would-be Corrupt Queen's new book will be hitting the shelves next month.

New or not, Hillary's expected to regurgitate the same themes--everyone & everything else is to blame for her 2016 Presidential Election loss, but herself.

If you're in need of a laugh, here's Gutfeld & Co reacting to the announcement.

Matt Vespa discusses why the title of Hillary's book is very fitting--and goes on to explain why she truly lost the election--so you don't have to fork over any money for it.


I'm a day late in posting this week.

Or should I say, less timely than usual.

There was a 10-hour internet outage in our neighborhood the other day, so I couldn't do any of my on-line spamming work.

Anyway, the best opening line about the latest White House shake-up came from an online friend who said:

Someone fell out of the clown car...

Since the "circus will be in town" for another four years at least, the NYT has a more detailed story of Anthony Scaramucci being sheista-canned.

This guy's ten-day tenure went by in such a flash, I never got to see any of his briefing antics that everyone is now talking about in past-tense.


Maybe I'm making too light of an apparent administration in disarray.

But to be honest, I find the revolving door appointments & firings to be hilariously entertaining.

Especially after eight years of Barry O's rule by Imperial Decree (a.k.a. Executive Order).  During the Era of HopeandChange, when one of Barry's minions was embroiled in a scandal, they'd Plead the Fifth and then walk away, suffering no consequences.  Lather, rinse, repeat.

Besides, I'm not surprised by all this especially when Our Grand Nagus' pre-presidential catch phrase was:

Despite my amusement, I don't think I'd want to be the White House Director of Communications...