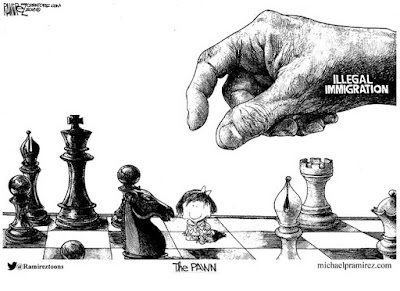 Last week, instead of quietly ignoring the IG's report on the FBI like Democrats and their media minions usually do, they discovered a distraction to tripper the snowflake masses--the separation of illegal immigrant families who've attempted to sneak across our border.

Staged photos of kids in cages--or taken during the Era of Hope & Change--along with fake,  like the Time Magazine cover, comparing ICE to a terrorist organization, proliferated the airwaves and cyberspace as weapons of mass manipulation.

Immigration enforcement, of sorts, has been going on for decades, or at least lip service was paid to it.

And Our Grand Nagus' separation policy was mentioned a month ago, but suddenly it's now a crisis demanding immediate resolution (i.e. open borders).

According to Derek Hunter, the border outrage is a distraction from the IG Report.

The Diplomad called the mass-snowflake triggering to be at the border of progressive madness.

Blonde in the Belly of the Beast noted these same leftists are overwhelmingly in favor of abortion on-demand, which they hope will lead to a population replacement--who will overwhelmingly vote Democrat.

In Brittany Hughes' video, she highlighted leftist hypocrisy about their "sudden" compassion for children--just not America's kids--and they don't care and this will get someone [an American citizen] killed.

Never mind that violent criminal aliens have permanently separated American loved ones from their now-grieving families .


There's also a debatable number of kids being used by human traffickers.

But leftists don't want to see or hear anything that goes against their open border narrative, nor let a good outrage to go to waste

In fact, the hostility was so over-the-top that Occupy Wall Street posted a chart about how to kill an ICE agent on Twitter... 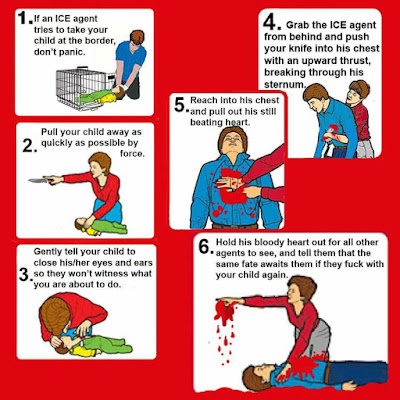 ...while DHS secretary was heckled by a DOJ deep stater.

Hollyweirdo Peter Fonda went even further--which I didn't think was possible--by advocating harassing ICE agents' families and even kidnapping Barron Trump.  Our Supermodel-in-Chief contacted the Secret Service in response to this unhinged has-been.

Despite--or because of--all the rabid virtue signalling, on the last day of Spring, Our Grand Nagus executive order halting the separation of illegal immigrant families.

But before the first day of Summer ended, the House's proposal appeared to be collapsing.

The solution most voters want is rather simple--enforce our immigration laws.

Unfortunately, the Democrats--and a good number of Republicans--are tone-deaf to what the majority of Americans want:  Illegal alien families either deported or detained.

While the politicians continue to wrangle on this or any other issue, Jesse Waters warns:


Well, the much anticipated IG report on the FBI's (mis)handling of it's investigation of Corrupt Queen Clinton.

The results were simultaneously devastating an a whitewash.

Basically, a bunch of g-men were cited as being openly biased against Our Grand Nagus.  But we're being assured that their animosity in no way influenced the performance of their duties.

The 568-page report is no breezy summer read.

It doesn't really matter, because, as Mark Steyn puts it there's no rule book in the FBI, while Sean Hannity called the report itself a swamp document.

And the swamp-dwellers are hoping this will all blow over and we can all go back to trusting the FBI, along with the other tentacles of Big Government.


Earlier this month, we heard about what a "feckless cunt" Ivanka Trump was by Feckless Cunt Samantha Bee.  Who, by the way, got to keep her late-night gig while Rosanne Barr & her entire cast got canned because her outrageous tweet against Valerie Jarred wasn't part of the #ResistTrump rant.

You'd think feckless entertainers, regardless of their political views, would have learned by now they should stick to what they know best--entertaining.

A couple nights ago, there was a political rally, formerly known as the "Tony Awards," on TV.

Robert De Niro went on an F-bomb-laced rant against Our Grand Nagus, to which Matt Vespa replied:  Thank you for contributing to Trump's re-election in 2020.

Of course, Ragging Bullshitter, isn't the only unhinged celeb.

Bill Maher, an alleged comedian, hopes there's another recession so we can get rid of Trump.

Brittany Hughes called this out as a willingness to screw everyday Americans for their leftist agenda.  As the FOX News Business folks point out, this is easy for someone worth $100 million to say.

Clueless celebs like these two--along with numerous others--are assisted by clueless politicians like Nancy Pelosi, who may trigger another Trump victory--provided voters don't vote against Trump out of spite.

I know there's more newsworthy events underway, like Trump's historic summit meeting with Kim Jong Un.  So why am I wasting internet bandwidth on unhinged celebrities?

Because, they along with their lesser-known lefty cohorts, ruin everything for everybody.

While the 2020 Presidential Election may still be in doubt, and the enjoyment everyday Americans seek get taken away from them, feckless celebrities will earn their just well-deserved awards...

Posted by Ted Henkle at 5:30 AM No comments:

A Tale of Two Comediennes


Earlier this week, Roseanne Barr found herself canned from ABC within hours of tweeting disparaging remarks about Valerie Jarrett.

So here's the part where I'm suppose to virtue signal my outrage in order to convince the leftist mob I'm not a racist.

I never cared for Roseanne Barr, and despite her newfound conservative-ish-ism, had no intention of watching her now short-lived show.  At the same time, I never cared for Valerie Jarrett either, and considered her the Obama Administration's version of Rasputin.

Even without any racist over, or undertones, I was taught never to insult anyone's appearance.

I'm certainly not upset over Roseanne's show being cancelled especially since she's had a long history of being a nutjob.  And I wouldn't even bother to comment on this rumpus about alleged racism if it weren't for the leftists' double-standard on this subject.


The other night, Samantha Bee, a woman I've never heard of until now, called Ivanka Trump a "feckless cunt", for posting a lovely picture of her holding her son.  Which, by the way, was slammed as "tone deaf" by celebrities.

Yeah, this bat-guano crazy fits right in there with being triggered over prom dresses, Disney princess costumes, and just about anything else snowflakes can think of.

Anyway, Sammy the Smear Monger apologized--just like Roseanne did--and some sponsors dutifully dumped her.  But she still gets to keep her late night gig, and whatever past accomplishments she achieved isn't being cast down the Memory Hole.  Liz Wheeler

Liz Wheeler thought Sammy should be shit-canned, while calling-out Roseanne; but Dennis Miller explained how she'll skate by due to the mudslinging ways of the Twitterverse.

Meanwhile, Mark Steyn observed that Sammy the Smear Monger's use of the "c-word" was due to the "f-word" has lost its power.

Oh, there's more to this tale of triggering, and more to come to be sure.

For now, I'll leave you with Brittany Hughes' invitation to have a REAL conversation about racism.

Yeah, I'm not holding my breath either.  On the positive side though, Sammy the Smear Monger and her ilk could actually help get Our Grand Nagus re-elected.

As for the fate of Roseanne's show and future employment options:  Quite frankly, my dears, I don't give a damn.