I had no intention of watching the Dimtard National Convention last week.

This week, the Republican National Convention is in full-swing, minus the Never Trumper turncoats.

I haven't felt the need to watch any of the GOP festival, since I plan on voting for Our Gran Nagus anyway.

From the snippets I followed the Dimtard "telethon" could be boiled down to two talking points:

2.America has been and continues to be an evil, oppressive country.

No one mentioned the riots "peaceful protests" (a.k.a the "other" Democrat convention).

But since the DNC wound down, the pollsters read the tea leaves and discovered the mayhem in America's cities is becoming a campaign issue.

Which means the Dimards popularity is starting to dwindle, as the rioters are turning into Trump's useful idiots.

Speaking of idiots, even politicians are waking up to the looming electoral danger... 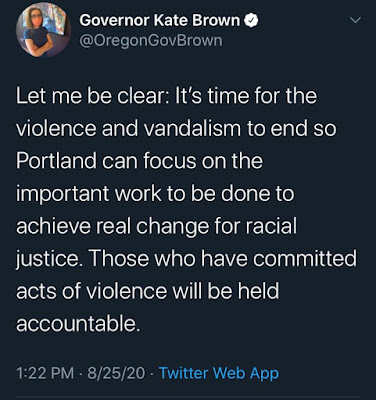 These revelations are now causing news rooms to issue calls for an end to the violence.

Sadly, a suspect in Kenosha, WI, was shot by police several times which sparked another round of riots, as usual, before all the facts were revealed and a proper investigation could be conducted.

Now Americans aren't waiting for election day to fight at the ballot box--armed civilians are "drawing a line in the sand."

Gunfire erupted between rioters and armed citizens with one juvenile suspect arrested for one of two deadly shootings.

And despite the Dimtard and media's call for calm, they're still addicted to Newspeak.  CNN referred to the havoc being wrought in Kenosha, WI as a fiery, but mostly peaceful protest.

While this is due to play-out in court, rioting in Minneapolis re-ignited two nights ago.

VDH provided some answers to the question:  What is the violence in American cities all about?

Meanwhile, back on the airwaves, the GOP finished up three days of their virtual convention.

The Diplomad gave ratings and synopses for each day:  Day 1, Day 2, and Day 3.

The RNC's production quality and positive message were reasons why live stream viewership was six times greater than the DNC's "telethon".

This coupled with the on-going rioting and five additional reasons is why Trump could win by a landslide.

And if he doesn't, the consensus is that Biden won't "win" either...

Update 2300 hours:
The Diplomad provided an “A” rating synopsis for the RNC’s last day.
Posted by Ted Henkle at 4:00 AM No comments:

No, the title of this post isn’t a typo.
Creepy Uncle Joe’s cognitive ability has been called into question by several conservative commentators.  But unlike past Republican candidates, questions about Biden’s health are off-limits.
Normally, a presidential candidate’s VP pick wouldn’t matter—but since we live in Clown World—it matters this time.
That’s because anyone not infected with Trump Derangement Syndrome (TDS), views Biden as an “empty suit,” or “Trojan Horse;” who, if he wins this November, probably won’t serve out his single term before being replaced by the Vice President.
Last week, Basement-dwelling Biden chose Kalamity Harris to be his running mate.  He’s been searching for the perfect running mate who needed only two qualifications... 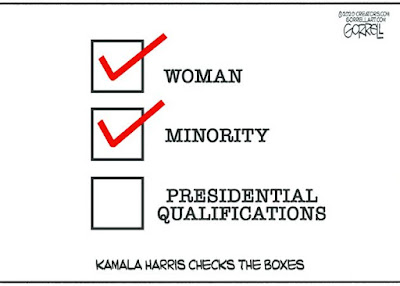 ...which left Gretchen Whitmer out in the cold, despite Biden’s apparent preference for her.
Dusting-off the old Obama PR campaign books, the Dimtards and Ministry of Truth are doing their damndest to generate the exciting excitement of Kamalimania.
And like Obama, to criticize Kalamity Harris is verboten...

...just ask the folks at Newsweek.  The rest of the media received the following warning from the Dimtard Party:  We’ll be watching you.

Now both Creepy Uncle Joe and Kalamity Harris are shielded from questions by pesky reporters, especially over her attacks against Biden during the debates.

Kalamity Harris’ presidential campaign met with calamity at the hands of Tulsi Gabbard in 4 minutes flat. And it only took one tweet to shred the current Kamala Narrative, highlighting just some of her baggage.

Harris has a long history of corruption, being an advocate of gun confiscation, and her schizophrenic criminal justice record.
In addition to ducking debates, the Ministry of Truth is trying to paint Kalamity Harris as a moderate...

...while trying to generate enthusiasm for tonight’s kickoff of the DNC virtual convention, where they will continue to play nice for the cameras.

The Biden-Harris Ticket may be good news for us like-minded folks, because the choice of Kalamity Harris may be backfiring on the Dimtards.

Hopefully, the Independents and undecided voters are paying attention, and continue to do so for the next few months.

The Seattle Police chief announced her resignation in the wake of Seattlesan's Politburo's vote to defund the police.  What’s left of the police department is the target of a lawsuit by the anarchists for the expensive protective gear they need to attack police, private citizens and vandalize private property.

Three nights ago, the insurrectionists in Portlandistan set fire to the police union building and assaulted an elderly woman.

But no matter what the Marxist revolutionaries do, they can count on the Ministry of Truth to provide cover in the form of glowing reviews, or ignoring the mayhem, as was the case with the Chicagostan looting spree earlier this week.

At "Insurrection Ground Zero" in Minneapolistan, over 1500 businesses were destroyed.

In conclusion:  Dimtard-led cities are imploding.

And they're fine with all the violence--until the monster they created turns on them--like the Portlandistan mayor discovered.

I’m certainly no fan of this "New Normal" the Dimtards love—as long as they suffer no consequences for their actions.

Last week, the Peoples Democratic Republic of Seattle's Politburo voted to abolish the Seattle Police Department.
Not "defund it."
Completely demolish it.
Portland hasn't abolished it's police force--yet.  They merely neutered it.  Last month, the Rose City recorded the highest number of homicide investigations in 3 decades.
Not to mention the perpetual "peaceful protests."
Meanwhile, in a "hold my beer moment" a few days ago, "Minneapolistan" issued this edict to the few law-abiding citizens remaining:  Be prepared to give up personal belongings to robbers and do what they say.
Minneapolis officials prefaced their decree with the Orwellian newspeak about wanting "...want those who live and work here to be safe..."
The Dimtards in Congress unanimously sided with the anarchists, Marxists and criminals, instead of law-abiding citizens.
Big Brother Tech and "debunking sites," are also obfuscating the issue of violence with semantic double-talk.
Comrade Karla feels the whole "Defund The Police" Movement will move us in a direction where the elites will be protected by ruthless, well-armed security details while the rest of us will have to settle for a "Peoples Militia."
One of the facets for the Leftists' acceptance and justification for violence is their collective dismissal of property rights.
Once property rights are abolished, any "...pursuit of happiness..." will sooner or later be stripped away from anyone who isn't "woke."