Prior to the Reign of Trump the Usurper, and the outbreak of the Wuhan Flu, presidential elections were moderately tense affairs.

But we’ve been living in Clown World since the 2016 Presidential Election so the media, political commentators, celebrities, activists, and social media; along with some government agencies, are half-expecting next Tuesday to be “Fort Sumter 2.0.”

In the meantime, details continue to emerge from Crackhead Biden’s shady business dealings...

...and the Ministry of Truth’s minions are doing their best to bury the story in order to drag Sleepy Uncle Joe across the finish line.

The latest revelation is that Creepy Uncle Joe worked with Crackhead Hunter to secure appointments for business partners and family members during the Era of HopeandChange.

In addition to shady ties with Ukraine and China, Tony Bobulinski, identified several US politicians that were possibly contacted to divvy-up potentially lucrative contracts.  One of the top names on the list:  Kalamity Harris

And then there’s the creation of not, one, but two shell companies, in order for Crackhead Biden to avoid having to register as a foreign agent.

Nor is it just Crackhead’s corruption that’s causing the Harris Biden Campaign headaches.  There’s Biden’s war on oil that’s bound to turn voters in oil-producing states to vote for Trump.

Predictions vary as to when we’ll actually know the final tally of next week’s critical election, thanks to the “non-existent” voter fraud that Creepy Uncle Joe admitted to employing.

But sooner or later, we’ll know whether the majority of Americans want to see the DC Swamp fully drained...

...or have it “flood” the whole country.


I didn’t follow the Amy Coney Barrett (ACB) Show Trial , because I figured it was like a Brett Kavanaugh Show Trial Lite.

I wasn’t wrong in my assumption.

In the wake of an exchange between ACB and Dimtard Senator Hirono, the term “sexual preference” was deemed “offensive.”

Literally, overnight outlets for the Ministry of Truth, like CNN, and VOX, picked-up the hue & cry over ACB’s “offensive” remarks.  Even Webster’s Dictionary issued its woke update to the newly offending term.

This Orwellian tactic’s immediate goal is to attack ACB, but the overall strategic plan is to add another muzzle on free speech.

And like all libtard fake outrage, it’s riddled with hypocrisy.

Hypocrisy we’re suppose to shut up about and ignore.

Speaking of which, an even bigger “October Surprise” bombshell dropped.  The Biden Bombshell that social media won’t let you see.

...of Facebook for your news, you wouldn’t see this story.

Big Brother Tech’s flagrant attempts to protect Biden, was also aided by the Ministry of Truth’s lies of omission (as in not airing the story), along with Creepy Uncle Joe’s campaign citing the censorship was “proof positive” that the Hunter Biden Emailgate story was “fake news.”

Of course, totalitarian regimes, like China and Iran are still allowed to push their state media.

But when it comes to anything that might tip the 2020 Election to Trump, the excuse Big Brother Tech is using is that it’s against their policy to propagate “hacked” material.

Even the Deepstaters are involved.  Shifty Schiff claims the scandal comes from “the Kremlin.”

The FBI is now investigating the case—to determine if this scandal is part of a Russian disinformation campaign to interfere with the 2020 Presidential Election.

Fortunately, Congressional Republicans don’t plan on taking this blatant censorship laying down and are considering subpoenaing the CEOs of Facebook and Twitter, even threatening to take away their legal immunity under Section 230 of the Communications Decency Act.

Defenders of the on-going censorship committed by Big Brother Tech say their private companies and can establish their own rules.

How-ev-er:  Big Brother Tech also claims to be part of the “Virtual Public Square” granting them immunity to libel suits.

They can’t have it both ways.

Meanwhile, as Congressional Republicans ponder their next move, Our Grand Nagus slammed Big Brother Tech as extensions of the DNC.

Like every attempts at cover-ups, Twitter’s attempt at Memory Holing the story created a Streisand Effect, that is, calling more attention to the scandal, causing

Good.  Neither Harris Biden, her his family members and her his sycophants deserve to be anywhere near the Levers of National Power.

Twitter relented a bit and loosened up their use of “anti-hacking” rules.  (I’ve tried to provide a link, but Google keeps leading me to sites claiming this is all fake outrage by MAGA hat wearers and that Big Brother Tech “acted appropriately).

But despite Big Brother Tech, the Ministry of Truth and the Dimtard’s attempt at gaslighting us, more trouble for Biden is on the way.

Hopefully, this Election Day will be “open season,” vote-wise, on the Harris Biden Campaign...


Since I’ll be voting for Our Grand Nagus, I didn’t feel the need to watch Vice President “Race Bannon” Pence nuke Kalamity Harris from orbit during the Vice Presidential debates earlier this week (7 October 2020).

There’s nothing authentic about Kalamity, her debate performance was cringeworthy, was easily dismantled by VP Pence, and which proved how horribly unlikable Kalamity Harris truly is.

Of course, her whiny “...I’m speaking...” is the Ministry of Truth’s latest rallying-cry against “mansplaning” by someone who’s “racist” and “sexist.”

Ben Shapiro has the breakdown of the media’s insane responses to the debates.

Unless you’re more interested in the fly that landed on Mike Pence’s head, you can (re)watch the full debate here. 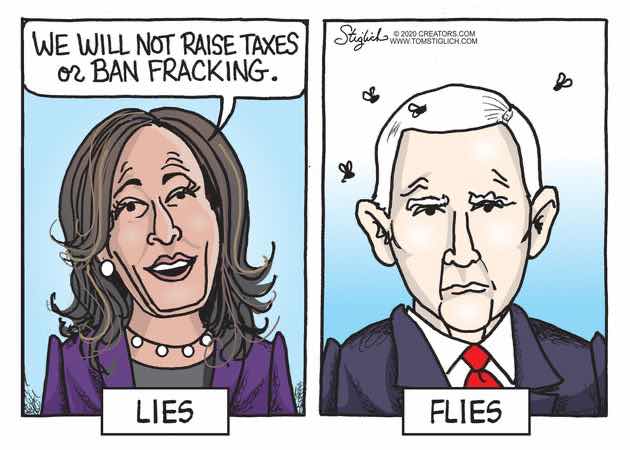 But we shouldn’t be too surprised by the lamestream media’s attempt at being distracted by trivial incidents and flying top-cover for the Dimtards and their activist minions. 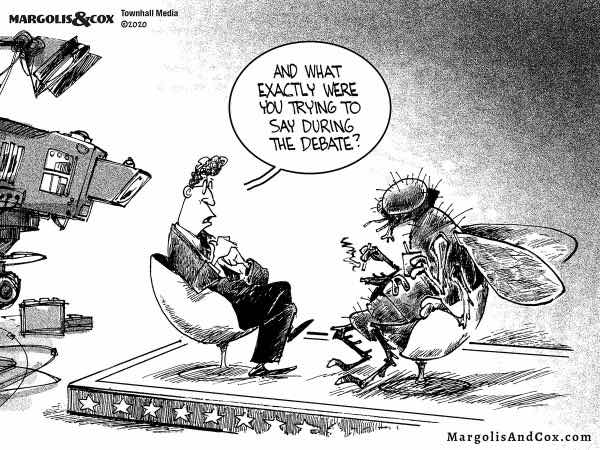 A couple weeks ago, the Associated Press issued new guidance for reporters covering the on-going violence:  Avoid the term “riots” and use “demonstration” instead.

Like the violence and looting that occurred in Wauwatosa, Wisconsin.

Then there’s the polls.  You know, the ones constantly trumpeting that Creepy Uncle Joe will beat Trump the Usurper a few weeks from now (3 November 2020).

Well, there’s a good reason to view the results with a hefty dose of skepticism, or don’t believe them whatsoever.  The pollsters selectively target specific areas to help skew the results.

It’s all part of their coordinated effort to make everyone afraid.

Despite the pre-election "battlefield preparation" by Dimtards and their woketard activists, there was a brief moment of civility from some public figures--with exceptions like the traitorous Hanoi Jane--regarding Our Grand Nagus and Supermodel in Chief contracting the Kung Flu.

Which made Diogenes’ Middle Finger wonder that Democratic leaders do not really believe the things they’ve spent the past 4 years saying about DJT.

1. I’m voting for Trump the Usurper, regardless of his performance.

2. I had a good idea how both parties would behave:  Trump would be brash & obnoxious, while Biden would be vague, flounder and stick to libtard talking points.

From the post-debate material I’ve been reading and watching, my assessment was fairly accurate.  I even knew the Ministry of Truth would cover for Biden...

...I just didn’t expect it to occur live, on-stage

If you want to read/watch the detailed post-mortems, here’s a rundown of some of them:

Despite what lies the Ministry of Truth is peddling, Trump murdered Biden on the debate stage.
So much so, that Commission on Presidential Debates is debating on installing a mic “kill switch.”
Which we can safely assume will be mostly, or even exclusively, rigged against Trump.
That is, if Biden & his handlers don’t boycott the next two debates.
Either way, Kalamity Harris is already conducting damage control on Biden’s evasive answer about packing the Supreme Court.
Most commentators who watched the entire debate thought it was unbecoming of Our Great Republic.
Derek Hunter thought it was fun watching Biden’s vacant debate style.
Mark Steyn thinks we should have more of such free-for-alls (but Trump should back off enough to let Biden hang himself with a gaffe or three).
Normally, I don’t care for brash personalities either.  But this is politics and at the risk of sounding melodramatic, the fate of America as we know it is at stake.
As I’ve half-joked before, American politics have been boring since the Hamilton vs. Burr “debate” of 1804, until Trump announced his presidential bid.
Meanwhile the Ministry of Truth is putting-in overtime crowing about “Biden’s debate victory.”
To which, Tim Pool asked:  If Biden truly won, then why are Democrats trying to change the rules, and even advising Biden to boycott the remaining two debates?

Despite Our Grand Nagus’ legion of faults, at least he can stand on his own and doesn’t require anyone or anything to prop him up.

Just as I finished writing this post, news broke that President Trump and First Lady Melania tested positive for Coronavirus.

It’s way too early to tell what may happen next, but I pray that our President and First Lady recover quickly and completely.