Well the Triggering Season is upon us.  Halloween is tomorrow and chances are snowflakes may be triggered over costumes.

I thought I posted about this last month when an article popped up reminding parents of white kids not to dress them up as Disney's Moana.  But I can't find it in my blog history.

Anyway, "lost episodes" aside, as Greg's monologue is spot-on about this concept is actually encouraging racial segregation.

Social Justice Whiners will whine about anything and everything and attempts at debating them will de-evolve into a circular argument.

Ben Shapiro, who's no fan of adults dressing-up, nails it in this video, calling this issue being a masterpiece of stupidity.
Posted by Ted Henkle at 5:00 AM No comments:


I've been watching Roaming Millennial 's pleasant videos for about a year now.

Her most recent vlog post was a response to her experience at triggering all the snowflakes for her support for Our Grand Nagus at Lafayette College (full video).

RM is braver than I am.  I certainly wouldn't want to face such a mob.

This incident is just one facet of the Left's long post-election tantrum.

Although I have to disagree with her somewhat.  I do take snowflakes and social justice whiners seriously.  Seriously enough to never want to see their hands on the levers of power.

As an aside:  If you watch any RM video, you might be branded as a White Supremacist.
Posted by Ted Henkle at 5:00 AM No comments:

Anyone who isn't a social justice whiner (SJW) knows that good hygiene goes a long way at reducing or eliminating the transmission of diseases.

Unfortunately, the People's Democratic Republic of Seattle's Politburo is full of SJWs.  Or enough of them to veto common-sense proposals.

A few months ago, a Seattle Councilman claimed that hosing down poop-covered sidewalks might be racially insensitive.

My visits to Seattle are becoming less frequent, thanks mostly to ever growing insanity displayed by Seattlites.


Ever since the 2016 Election, Democrats and their media mouthpieces have been chasing their collective tails over the Russia Investigation.

As it turned out though, the corrupt candidate who was exposed wasn't the one leftists were hoping for.

A day later, Sean Hannity called-out the Democrats and media have lied about Russia this past year.


Before Sean's show aired, it was announced that a Senate judiciary committee will investigate Clinton-Russia corruption.


Mark Steyn asked at the end of his Uranium & Diarrhea Inc article:  Any chance justice will come a-callin' for the Clintons?


I'd like to think so, but the Clintons have proved to be a slippery, well-connected, and well protected family.

Even if this is fake news as Slate and Snopes say it is, I always thought selling 20% of our uranium reserves to Russia was one of many bad deals made by Barry O's reign of HopeandChange.

SJWs Sullying Sports (and Every Other Form of Entertainment)


The NFL is getting sacked, in good part due to their players taking a knee during the National Anthem.

A recent NYT article pointed out that the NFL is one of the most divisive brands in America.

What's also not a surprise is NFL is happy to insult America--until it impacts their bank accounts.

Here's some advice:  The clueless NFL, Hollywood celebs and rock stars should shut the Hell up about politics.


I try to ignore celebrity news as much as possible, especially when most of them use their fame for social justice whining (SJW).

While Harvey Weinstein isn't a celebrity per se, he was the producer providing the financial backing that launched, or at least perpetuated movie stars' celebrity status.

But nearly two weeks ago, allegations of sexual harassment--spanning decades--finally exploded on the scene.

Weintstein's serial sexual assaults seemed to have been an open secret among Hollyweirdos, and their media allies, like NBC which tried to kill the story.  It was also in Harvey's contract that as long as he shelled-out increasing amounts of hush-money, he wouldn't be fired.

Until the story got too big to ignore.

Of course, the Corrupt Queen couldn't let this scandal go to waste...


...by calling Our Grand Nagus a "sexual assaulter," but considered Slick Willy's sexcapades was "old news."


Another bit of old news is the double standard:  GOP candidate's gaffe of "binders full of women" is bad, but sexual assaults by Democrats and their donors get swept under the casting couch.

Meanwhile, late night talk show hosts, like Crybaby Kimmel, who've scolded us on voting for Trump, clinging to our guns and wanting to see Obamacare repealed, suddenly realize they're not America's moral guardians after all. 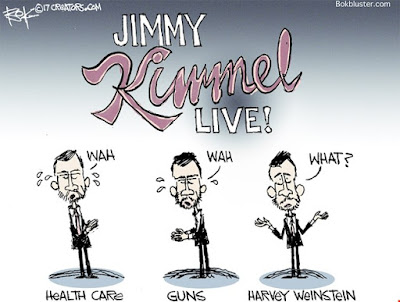 They weren't our moral guardians to begin with and most people are tuning them out, along with sports, but that's a topic for another post.

And this is just the beginning of the "Triggering Season."

Halloween is just three weeks away, but SJWs were triggered over costumes before they went about defacing Columbus monuments.

They weren't too crazy about the sexy Fake News dress.

Which was tame in comparison to one writer who SJW-splained  to Caucasian parents why your white kid shouldn't dress up as Moana for Halloween.

Little girls should be allowed to dress up as any Disney Princess they want to.

We still have Thanksgiving and Christmas approaching, which will give SJWs plenty of time to concoct more grievances against anyone trying to enjoy the holidays.
Posted by Ted Henkle at 5:00 AM No comments:

And no one's figured out what POS Paddock's motive(s) were, only that he was scouting out other locations.

The mystery surrounding Paddock was the manure which fertilized all sorts of conspiracy theories that have sprung up in the aftermath of the attack.

While the investigation continues, politicians, along with the media and activist groups, need to STFU (Shut the Fuck Up) in their attempts to politicize the massacre.


Instead they should join us in mourning with the friends and families who lost loved ones, along with honoring the heroes who helped the victims.

I was on duty the other night, so my partner and I watched the news unfold of the horrific shooting in Las Vegas.

At this time, Las Vegas PD, federal agencies are racing to uncover the gunman's motive.

Chief among them was Hillary Clinton, who tweeted a call-to-arms about standing up to the silencer-loving NRA.

And a CBS legal exec found herself out of a job when she tweeted the Vegas victims didn't deserve any sympathy because country music fans are often Republican.

David French also points out there's some strange facets to this incident.

But until we get all the answers, it's time to pray for the victims and their families, and honor the everyday heroes.


We should be focusing our attention on the crisis in Puerto Rico which was devastated by Hurricane Maria.  Which by the way, Our Grand Nagus is pushing back against accusations of slow relief response.

Not to mention the on-going issues beyond our territories.

Last week instead, leftists were triggered by Trump's tell that son of a bitch he's fired comment directed at NFL players who won't stand during the National Anthem.

In addition to Paul Joseph Watson video, featured above, Gregg Gutfeld reminded us it it wasn't Trump who politicized the game.


During my active duty days, we were told we could participate in marches and demonstrations--as long as we weren't in uniform.

NFL players wear uniforms, and the ones who "take a knee" during the National Anthem are not only disrespecting our flag, but their fans as well.

People go to sporting events to enjoy their leisure time--not to be subjected to someone's political-social pet peeves.

This also goes for the coaches and owners who support this bullshit.

You want to take a knee during the National Anthem?

Do so outside the stadium--and be sure to take off your uniform when you do.  Or better yet, as Brittany Hughes suggested on her video--take a hike.