Amid all the hoopla of last week's "Schiff Show," or the Dimtards' attempt at overthrowing Trump the Usurper via "impeachment," the beleaguered fast-food franchise, Chick-Fil-A came under fire.

This time the Ministry of Truth also smeared the Salvation Army as "anti-LGBT."

And unlike previous assaults by the Woketards of the Twitterverse, Chick-Fil-A caved and will no longer be donating to the Salvation Army, which peeved conservatives.


Both companies issued statements.  While Chick-Fil-A made excuses, the Salvation Army expressed its disappointment.

Contrary to the fake-news image of being a Bastion of Bigotry, Chick-Fil-A has quite a track record of donating to leftist organizations.

But as both Liz Wheeler and Lauren Chen pointed out:

Don't give in to the rage mob.

Because you can only appease them when they destroy you.

I haven't seen any conservatives calling for a boycott, nor am I going to do so, but Chick-Fil-A turning chicken against Social Justice Whiners (SJWs) is disheartening.


Well, the "Schiff Show," more commonly known as the Official Impeachment Hearing of Donald Trump (for being Donald Trump), began this week.

And like the folks at Stilton's Place, I'd love to say that I'm deeply looking forward to not watching it. Ever. For any reason.

Unfortunately, when I'm on duty we have to have our section's four TVs tuned to the news.  When I'm with a non-conservative partner, then the news broadcasts reflect Steve Breen's cartoon above.

It's as if the news is reporting on two different countries.

Like many of you like-minded folks, I view this whole charade as a soft coup, an attempt to unseat Our Grand Nagus, because the Dimtards are afraid none of their candidates could defeat him in the 2020 Presidential Election.


This opening week of the Schiff Show shows that policy differences between Our Grand Nagus and the Swamp-Dwelling Deep Staters is an impeachable offense.

The Diplomad, "...a former denizen of the Foggy Bottom Swamp..." calls this a new whine in an old battle.

And Canadian commentator, Mark Steyn, carries on the charge once more into Fogged Bottom.

Meanwhile, for the accused, due process has been thrown out the window.

Schiff and his Big Brother Tech allies are censoring any mention of the so-called whistleblower.

For instance, YouTuber Tim Pool, found himself suspended from Facebook due to "crime activity."

Basically, keep digging against Trump--and his supporters--until the clowns running the circus find something they consider a crime against their sensibilities. 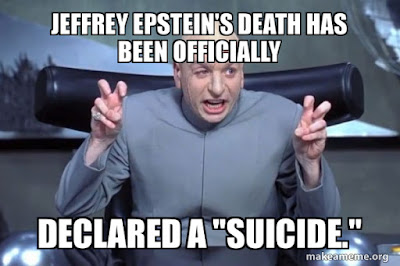 With the usual stuff going on inside and outside the Ramparts of Civilization, I thought I'd take a dark humor break.

I've neither dismissed nor embraced the Clinton Body Count theory.

Until that is, until pedo Epstein allegedly offed himself...

...while under Suicide Watch protocols...

And I'm willing to guess the Democrats and their voters don't believe it either.

They probably don't want to be the next ones to "commit suicide." 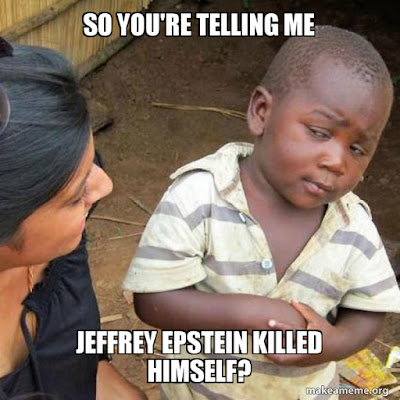 For the past week or so, there's been an explosion of Epstein Didn't Kill Himself memes.

So I thought I'd jump on the meme bandwagon and concoct some of my own, via Make A Meme, which can be seen on this post.

Mike Rothschild explains why Espstein Didn't Kill Himself Memes are so popular. 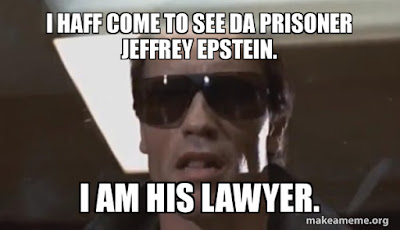 I don't consider myself a conspiracy theorist, but the circumstances of Epstein's premature departure is way too convenient and suspicious.

So until all doubts are settled, I'm going to take Kurt Schlichter's advice and enjoy the glorious "Epstein Didn't Kill Himself" memes. 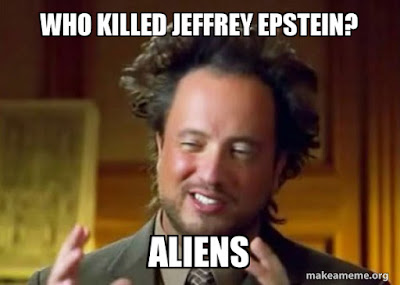 Because for now, it's the only way to fight back.
Posted by Ted Henkle at 12:30 AM No comments:


A few days ago in norther Mexico, several Americans were killed and several more wounded--all women and children--when their family convoy was ambushed by drug cartel gunmen.

The Mormon family appears to have been targeted, but no one knows exactly why.


Relatives of the victims think their loved ones were used as bait in clash between rival drug gangs.

And since we live in Clown World, the LA Times didn't want to be left out of the "Woke Awards." Their initial article initially insinuating the family was targeted because of "...it's long history of violence..."  The headline was changed after the ensuing backlash.

What does have a long history of violence is Mexico, with all the trappings of a failed state.  The nation's murder rate hit an all-time high last year.

Sadly, for people on both sides of the border, the killings didn't seem to slow down for this year.

Of course, the American libtard media is making sure Obama's "Fast and Furious" program remains in the Memory Hole.

Regardless of the causes and blame for all the violence it's crazy to have an open and unenforced border with a country overrun by it's drug cartels.

But this is just another aspect of America's Clown World.