"...and there was much rejoicing."

Just in time to get that last-minute Festivus gift.

Hillary's book and interviews are certainly in the Festivus spirit, especially with the Airing of Grievances...
There's a lot of news and issues brewing in the waning days of Summer 2017, that I could be posing about.  Unfortunately, Corrupt Queen Hillary Clinton can't let go of the past, nor accept the fact she lost to Our Grand Nagus.

It's as if, as Mark Steyn said: Hillary is acting like O.J. Simpson and "looking for the real killers."

Judge Jeanine bangs her gavel down on Hillary's excuses.

I like Jesse Waters' opening comment:  She's working harder to sell the book than she did to win the election.

And Liz Wheeler rolled-in with a run-down on "what happened."

Fortunately, I don't have to read What Happened, because:

a. I already know what happened, and so do the folks I linked to in this post, and
b. Kate Reads Books on Twitter already did and has this "Unholy Shit!" reaction to women forcing their daughters seek Hillary's forgiveness for not voting.

One would think by now, a normal person would ask:

The silver lining in all this dreary & deluded rehash of the 2016 Presidential Campaign is that it's fodder for satire.

We All Made Mistakes, But You Made Most of Them, along with the follow-on What Also Happened--casting blame on her failed book tour.

Honoring 9-11-01 and Our On-Going War Against Islamists

Today's a sad day, not only in remembering the vicious attack that occurred 16 years ago, but also we're no closer to what was once called "victory" than we were 16 years ago.

Sure Osama bin Laden, and Saddam Hussein are dead thanks to our military might.  But we still have Islamist enemies outside--and inside--the Ramparts of Civilization we've been contending with since 2001.

The Diplomad summed up his feelings in his September 11 post.

And it's not just the Islamists that continually cause us grief, but in some (most?) cases our own political ruling class.

Mark Steyn rehashed his Dishonored Dead article for another tragic anniversary--the attack on our consulate in Benghazi.

As the Sunshine State is bracing itself against Hurricane Irma, at least one conspiracy theorist and social justice whiner is working overtime to put their own spin on the impending storm.

Hurricanes be racist y'all.

Comrade Karla wondered if this were a joke.  I told him I'm hoping the preponderance of the 7.2K reactions were "Wow!" (as in WTF?!) and "LOL!" (as in YGTBSM).

If this isn't a joke, then such astounding ignorance makes me want to scream.

Waking Up to Ashfall

For nearly 26 years, where ever I lived; I'd drive to the gym 3-6 days a week in the pre-dawn darkness in just about every weather condition imaginable (and sort-of safe to travel in).

You know, the whole Neither snow nor rain... spiel about nothing keeping me from my workouts.

Yesterday though, was the first time I drove through ash fall from one of the many wildfires burning up our Evergreen State.

While my wife was at work, where the ash fall and smoky haze were worse; she said it reminded her of the Mount St. Helens eruption.

The Seattle Times put a more mundane spin on our predicament:  Ash falls like snow as wildfire rage in the Pacific Northwest.

So while large chunks of real estate in Texas and Louisiana are still underwater due to Hurricane Harvey; Washington, Idaho, Montana and Oregon are tinder-dry and burning to a crisp.

KHQ-6 has a full list of wildfires burning in Washington, Idaho and Montana.

In the aftermath of Hurricane Harvey and with Hurricane Irma bearing down on Florida I'm not all that keen about praying for rain in a "be careful what you wish for" sort of way.

While Washington State isn't known for it's sunshiny beaches, we have gotten severe "nor'westers" in the past.

And:  Winter is coming.
Posted by Ted Henkle at 5:00 AM No comments:


I think this Labor Day is a perfect time for us to honor the labors of those involved with the rescue and recovery efforts in the wake of  Hurricane Harvey.

By now, we've all seen the devastation wrought by the storm to great swaths of Texas and Louisiana. Even before the storm blew out, volunteers like those of the now-famous Cajun Navy, "self-deployed" in order to rescue stranded survivors.


It's like America's version of the evacuation of Dunkirk.

With all the destruction, tragedy, and yes, inspiring heroism, you'd think the leftist media wouldn't have anything to criticize.

Our Supermodel in-Chief was spotted wearing stiletto heals as she and her hubby The Grand Nagus were on their way to pay Texans a visit.  As Tucker Carlson said:  You'd think the press should have more to worry about than what the First Lady wears...

It's not like Melania was going to be manning the tiller of a Cajun Navy rescue boat.

No matter.  The media found something to feast upon. 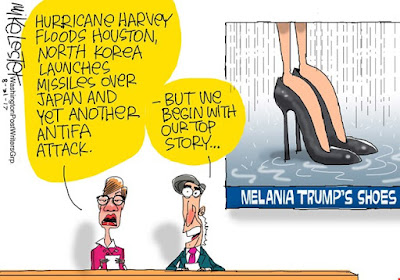 In addition to "Stilettogate" others within the Ministry of Truth are trying to tell us Trump hasn't been showing enough empathy towards the victims (among other things).

As The Diplomad said, No thanks to the President being a Healer in-Chief.

Yeah, I know Our Grand Nagus isn't a warm & cuddly kind of guy.  It's not why I voted for him.

Greg Gutfeld finally revived his smart aleck humor and gave this synopsis in his video:

Heroes united us, now zeros try to divide us.

And in another two:  First, America's response to tragedy repudiates the media.


Second, Disaster rescues us from the delusions of division.
Posted by Ted Henkle at 5:00 AM No comments: