And shortly after this bombshell, it was revealed that three other Broward County Sheriff's deputies remained outside while students were being slaughtered.

Mark Steyn was spot-on to observe this was A total failure of the state, and what is needed is a calm, rational debate is the key to discussions about gun control.

Instead, what us law-abiding, Second Amendment advocates keep getting is "Two Minutes of Hate".  And not just from CNN, but across the entire electronic and cyber spectrum.

For the most part, I've written in-support of our state and local law enforcement agencies. That being said though, Broward County Sheriff, Scott Israel, looks like a total asshole engaged in CYA ("Cover Your Ass"), which falls in-line with the gun grabbers' goals.


I was on duty this past Valentine's Day.

But instead of being bombarded by news stories about love & romance during my shift, my partner and I were subjected to the unfolding story of Nikolas Cruz killing 17 people and wounding 14 more at the Marjory Stoneman Douglas High School in Parkland, FL.

Before all the facts were known about this heart-wrenching event; Democrats, the media and celebrities began braying about gun control.

And in keeping with their Never-Let-A-Crisis-Go-To-Waste tactic, they've been braying non-stop ever since.

Brittany Hughes called them out for exploiting traumatized children to push their anti-gun agenda.

Derek Hunter followed-suit, and explained how the leftist Exploitation Machine is rolling on.

Don't think the Left's ultimate goal is to ban all scary-looking rifles?

Well, they seemed to have tipped their hand during a CNN-sponsored townhall meeting two nights ago. Or, as Matt Vespa called it:  A North Korean kangaroo court peddling gun confiscation.

The Diplomad warned that the "common sense" gun control leftists advocate will be weaponized like every other agency and program they're in charge of.

The problem, as us like-minded folks see it, isn't the scary-looking guns, but the perpetrators themselves and those who've enabled them.


While Cruz wasn't an "Allahu Akbar" screaming jihadist, he was a known wolf to the FBI, and local law enforcement.  But even prior to the "missed" red-flags, Broward County Schools colluded with local law enforcement.  Together, they implemented the "Broward County Solution", where a dozen misdemeanor offenses were downgraded to school-related issues.

But the leftist narrative has been dominating the airwaves and cyberspace.  Blame is leveled at the Republican Party and the National Rifle Association, instead of with the perpetrator and his enablers.

My first ex-wife tried blaming me for a hurricane.  Her logic was:  If you didn't join the military, cross train in the Tactical Air Control field, we wouldn't be stationed at Fort Bragg and have to deal with this.

Ever since that watershed event in my Hell-on-Earth first marriage, I'm easily triggered over being blamed for something I didn't do.  So as a Republican voter and lifetime member of the NRA, I'm openly hostile against such claims that I, along with fellow voters and members, "have blood on our hands."

Fortunately, instead of me shouting back "BS!" or "Foxtrot Yankee!" to such slander, Kurt Schlichter has more practical advice on how to beat 7 of the terrible leftist gun control arguments.

On the flip-side, Meredith Drake-O'Conner discussed the 6 reasons why your right-wing friend isn't coming to your side on gun control.

Which was Item #2 on Kevin McCullough's 7 Simple Steps to Eliminate School Shootings Overnight.


While Mr. McCullough's ideas may, sadly, not completely eliminate school shootings, they'd be more effective than the left's gun-grabbing fetish.

Which they won't find acceptable anyway because it will run contrary to their Anti-Gun Narrative.  So unfortunately we'll never know if these steps will actually work.

Instead, we'll be treated to upcoming stunts like the Student Lie-In at the White House (27 Feb), a 17-minute nation-wide walk-out by teachers and students (14 Mar), followed by anti-gun violence demonstrations ten days later.

The sucking-up to Kim's sister, Kim Jo Yong, wasn't limited to CNN either.

Despite the backlash, the NYT CEO felt the fawning was "good reporting."

Well, the "good reporting" overlooked the fact that "The Hunger Games" are a reality in North Korea.

--Brittany Hughes rolled-in on the mealy mouthed media with her Reality Check.

--Kurt Schlichter reminded us that the leftist media's slobbering over the Norks reminds us why we have the Second Amendment.

I posted this comparison, along with Bob Gorrell's latest political cartoon on Facebook:

Watching the media fawning over Rocket Man's kid sister (who's gainfully employed as the Democratic Peoples Republic of Korea's Minister of Propaganda and Agitation) is like watching Jane Fonda frolicking on a North Vietnamese anti-aircraft gun.

The Ebbing Away of Empathy


Valentine's Day is two days away.

And yet, instead of today's technology bringing us closer together, it seems to be exacerbating the political social divides we have among each other--even between soulmates.

That was five years ago--and before the mass emotional meltdowns after the 2016 Presidential Election.

He's not the only one.

Mark Steyn, in his Among the Empathizers video points out that today's virtue-signalling snowflakes not only lack empathy towards those they currently disagree with, but also towards people in the past, who lived under different circumstances.

Which leads to ding-bat decisions like this:  Duluth schools drop "Huckleberry Finn," and "To Kill A Mockingbird" from its curriculum.

I've often commented on how Orwellian our society is becoming.

I wonder at what point will we reach Fahrenheit 451?
Posted by Ted Henkle at 5:00 AM No comments:


Last week's news was dominated by one question:  Will Our Grand Nagus declassify THE MEMO?

He did by the end of the week--and the Donkey Drove hasn't stopped braying about it since.

Here is what's got the Democrats in an uproar.

But they'll get their chance.

Yesterday, the House (Lack of) Intelligence Committee voted to release the Democratic Memo.  So now Our Grand Nagus has five days to decide whether or not to release it.

Until then, getting back to The Memo at-hand:  The Mem[not so]Wow hasn't revealed anything us like-minded folks didn't know, or at least suspect, before.

That is:  What REALLY happened was that Corrupt Queen Hillary and her cronies concocted a phony dossier, and convinced one or more FISA judges to okay surveillance on Team Trump, while at the same time calling-in favors among DNC operatives to purge Bolshevik Bernie from the Democratic Primary.

Of course, leftists don't see it that way.

They have been in meltdown mode ever since the memo was released.  Democrats were desperate to kill it, while their media allies were--for the first time ever--against government transparency.

The Diplomad re-asks the question he did over a year ago:  Why would the Bare-Chested Czar want a bad deal by getting Trump elected?

It's unsettling for half of America to realize leftist political operatives have been, well, operating among our intelligence services.  What's even more disturbing is the unanswered question of:  Did the FISA Court know the warrant request was based on information paid for by Clinton cronies? 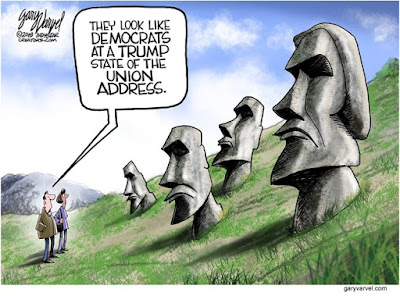