Survivalist Offs Himself in His Bunker 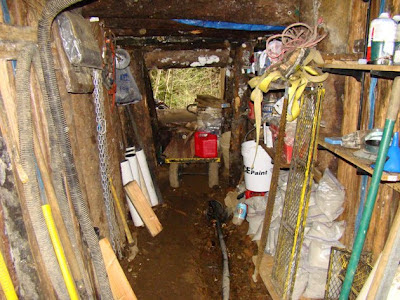 Unfortunately, this was after he killed his wife and daughter.  Police have been looking for this POS (Piece of "Crap") for about a week.  The details of this story can be read in the Seattle Times and on Yahoo.
Posted by Ted Henkle at 6:00 PM No comments:

It looks like The One has adapted some of Nixon's methods.  Several private citizens have been called out on an Obama campaign website.

Contributing to Mitt Romney's campaign.  Kimberley Strassel of the WSJ has the story on Our Dear Leader's enemies list.

...say what you will about Romney, but he really seems to get how to beat the One. I read that his team has based their structure along the lines of Clinton's team, such as establishing a "war room" to make immediate responses to anything Obama says. It seems to be working -- they dropped the "Obama eats dog" message, fired back on the "enemy list," and I see they already have a response out to the Obama commercial that says "Romney would not have gone after Osama." I am more heartened by the day by his seeming competence of the Romney team, and the thin, pathetic (and rather obvious) pleading by Obama that he killed bin Laden and little or no other messaging lately.


If Romney can rise above the margin of voter fraud that will favor Obama, he may just be able to topple the One and usher in the long-awaited era of rising seas, intensifying wars, greater pollution, and racism that all us conservatives pine for! 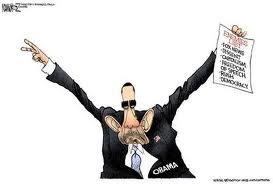 Posted by Ted Henkle at 7:00 AM No comments: 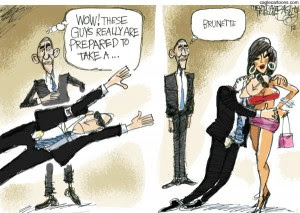 For the past couple of weeks, the US Secret Service has been under the spotlight for the Columbian prostitution scandal. Initially, 11 agents, part of the president's advanced security detail were implicated in seeking the services of working ladies while off duty. While prostitution is legal in Columbia, many of the agents involved allegedly brought their rent-a-dates into their rooms, which contained classified information--like the president's itinerary. Five days ago, FOX News reported the latest shakedown.

Meanwhile, Mark Steyn didn't let this "opportunity" slip by, with his latest Grope and Change article. 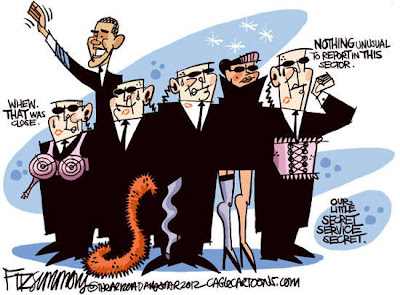 “Socialism is a philosophy of failure, the creed of ignorance, and the gospel of envy. Its inherent virtue is the equal sharing of misery."-(Winston Churchill)


A Facebook friend of mine posted this, so I thought it was worth reposting here.
Posted by Ted Henkle at 7:00 AM No comments: 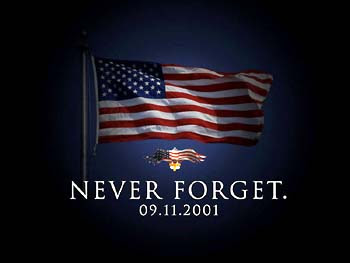 Last week, my girlfriend and I went to visit my mom in Upstate New York.  However, before driving upstate, we stopped-in on my girlfriend's sister who lives north of "The City," as us New Yorkers refer to New York City (NYC).  I haven't been to The City since I was a teenager.  My girlfriend's sister is a paramedic and was dispatched down to Ground Zero the day after the September 11th Attack, while my girlfriend's ex-husband was in the Pentagon that day.  So last Friday we decided to spend the afternoon at the 911 Memorial.

This is what the new World Trade Center will look like once it is complete: 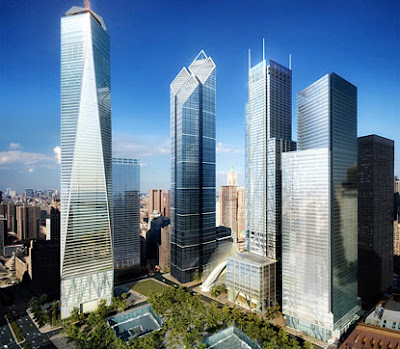 But for now, only the Freedom Tower is under construction, while Tower 7 is complete.  Here's the view that greeted us as we drove into downtown Manhattan: 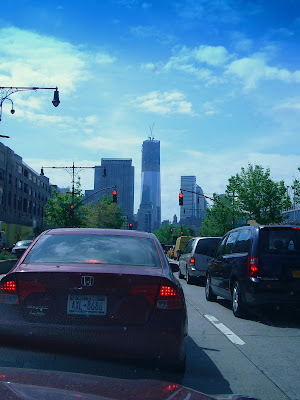 We signed-up for a guided tour, rather than wandering the memorial grounds.  Prior to the tour,  we meandered through the memorial museum, at NYFD Station #11. 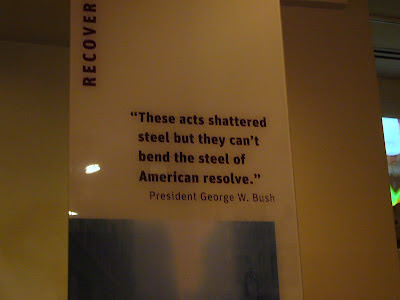 The guides for these tours are all volunteers and were somehow personally involved, or affected by, the attacks on that day.  Our main narrator, who's name escapes me, allowed a man to use her phone to locate his daughter, who was in the Trade Center's daycare.  Fortunately the girl, along with all the other children were evacuated safely thanks to a couple of police officers.  One, we were told, continues to suffer from health problems. 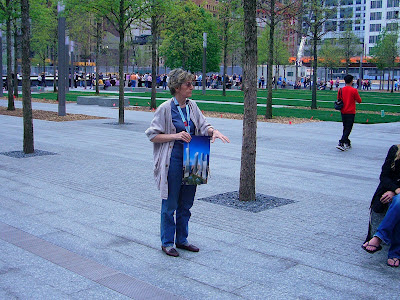 Miriam's involvement on the other hand, was more hard-hitting.  Her husband was a newly promoted lieutenant in the NYFD.  The terrorists attack right around shift-change and Miriam's husband, like so many others, chose to rush to the scene, rather than leave their buddies behind.  Her husband was one of the 343 firefighters killed that day. 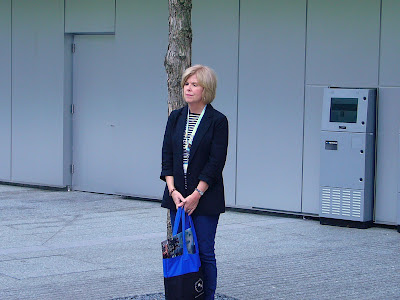 The tour started outside the museum/Station #11.  Our first stop was around the corner, to the bronze mural on the station's wall. 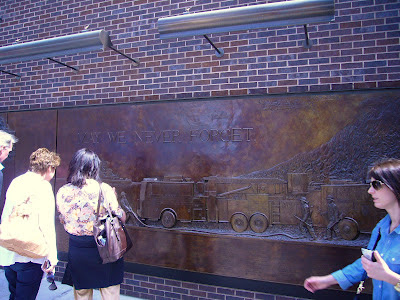 Another view of the mural... 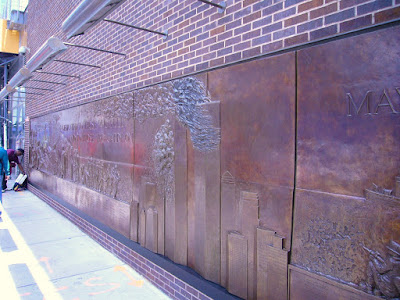 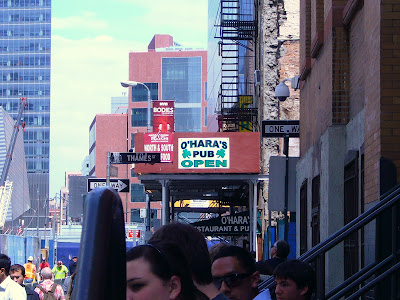 Looking up at Freedom Tower, our guide told us the hijacked planes struck both towers at an altitude a few stories down from the completed level of the Freedom Tower.  Which for aircraft flying over the city, is extremely low indeed.  Freedom Tower, once completed will stand 1,776 feet--a deliberate and symbolic height. 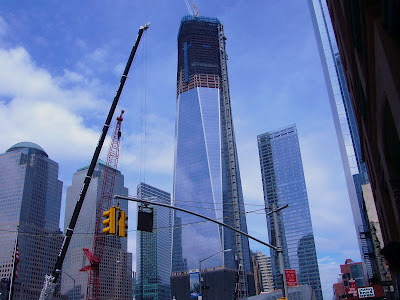 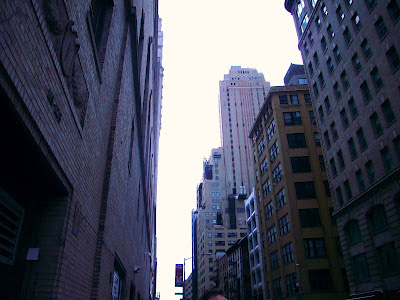 After going through a security screening, similar to that of airports, we entered the memorial grounds. 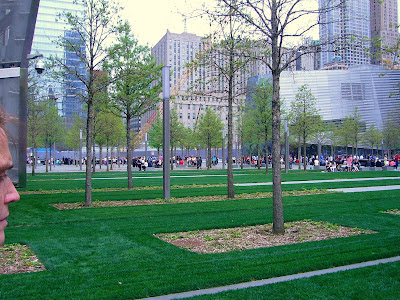 The names of all the victims are cut into a bronze railing surround both memorial pools. Looking into the South Tower Memorial Pool, we were told the water in the fountain is separated into strands to represent each individual victim.  The pit in the center was designed so that no matter where you stand, you cannot see the bottom.  The concept was to express emptiness and loss. 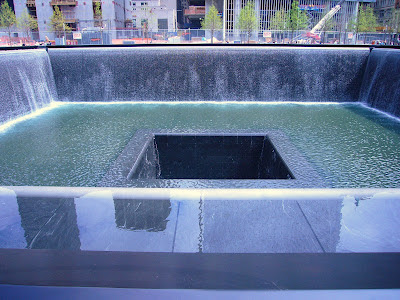 Pictured below, is the Survivor Tree, the only plant that didn't die at the original World Trade Center site. 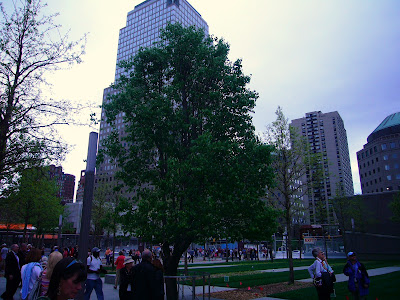 Before we left, I took a picture of the North Tower Memorial Pool. 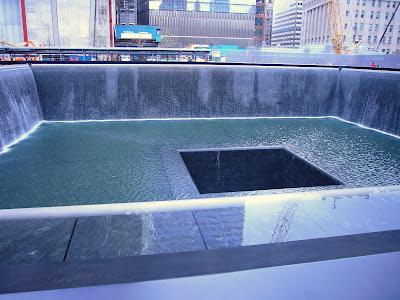 I found the 911 Memorial to be deeply moving, in some ways even more so than the USS Arizona Memorial, because I, like many of you, actually watched the events of 9/11 unfold from the very start.  It's a sobering reminder for all of us on what happened nearly eleven years ago--and what may happen again if we cease our vigilance.
Posted by Ted Henkle at 6:00 PM 1 comment: 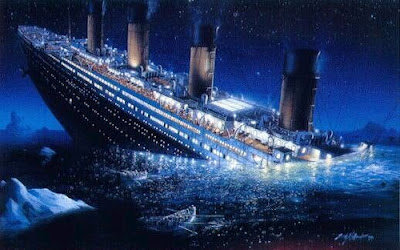 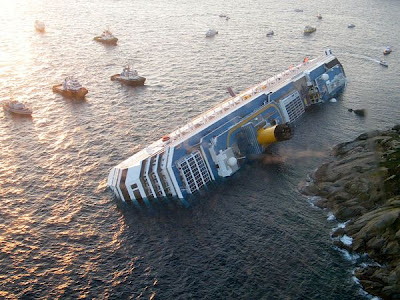 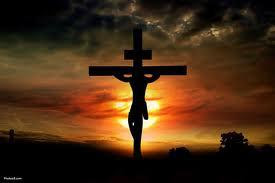 Posted by Ted Henkle at 5:03 PM No comments: 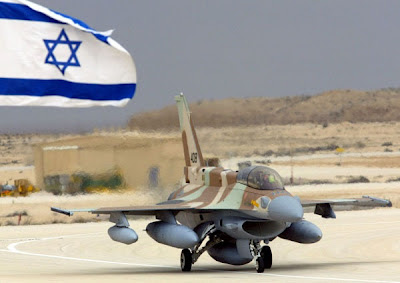 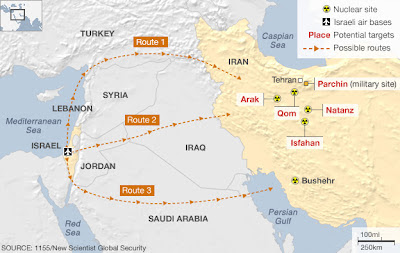 
- Same with the Saudis - they may not have a great nuke program, but I'll bet big money they have a deal to get their hands on some Pak weapons, since they helped pay for them in the first place. Plus, they have the big money to buy a whole program if they wanted to.
Posted by Ted Henkle at 7:30 AM No comments: 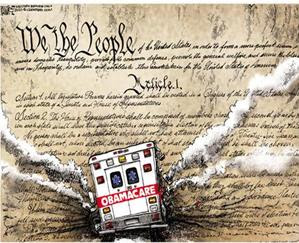 For years liberal judges across the nation have been "legislating from the bench."  That is striking down laws passed by state legislatures.  California's gay marriage being just one example.  Of course, liberal politicians have been cool with this.  Until now.  All of a sudden, Our Dear Leader is now concerned that Obamacare will be struck down by "unelected few."
But the US Court of Appeals for the 5th Circuit isn't taking Obama's comments laying down and causing Obama to back pedal on his initial comments.
Speaking of comments, here's a sampling of responses from my friends:
This guy is unbelievable. The Court has overturned close to 200 Acts of Congress since 1789. Doesn't he read? I'm guessing no.   Oh, and there's nothing like trying to litigate a case in advance, in the media, in front of two foreign heads of state. Idiot.
Speaking of Constitutional idiocy, Powerline rolls-in on Obama's bona fides.
You can tell the Obamas were pretty much political hacks when working at the University of Chicago. Michelle had been doing outreach work for the university making about $80k per year until her husband was elected to the Illinois State Senate. Then, suddenly she got a more than 350% pay raise to $300k per year. Amazingly, though, as soon as she left that position and the state to go live in DC, that job has gone completely unfilled. Kind of suspicious that a job of such importance that someone would get such a salary for apparently was actually unnecessary. But, that's typical for this city.
Typical, though, for most anything associated with politics.

Professor of Constitutional Law no less...Wish I could go hibernate the next administration...

I wish I could hibernate too.  I have other things I'd rather be watching, reading and doing on line, than dealing with this endlessly depressing stuff.  However, I keep telling myself, that remaining silent would be akin to acceptance.
Here's what we can expect if the US Supreme Court rules in favor of Obamacare... 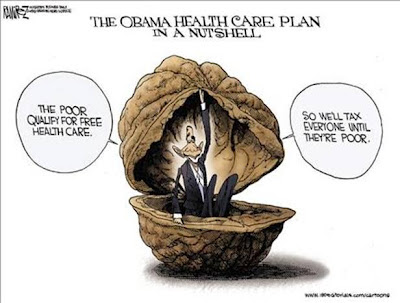