Last week, the Little Leaguers of Team Obama, announced they'd consider allowing Iran to keep its centrifuges located in a fortified underground bunker.
Realistically, I'm not sure what we could to about them anyway, short of employing bunker-busting munitions.  But you'd think one of our negotiators would imply our willingness, or the Israelis, to do so in order to encourage compliance.
And speaking of compliance, we're not sure if there'll be a written deal, or a verbal "gentlemen's agreement."
With such a "sound assurance," what could possibly go wrong?
Just ignore those "Death to America!" chants.

Bergdahl to be Charged


Earlier this week, the US Army charged Bowe Bergdahl with desertion.

Of course, the Obamunists still think exchanging five Taliban commanders for one deserter was worth it.

Mark Steyn re-hashes some of his initial observations in Bowe Jest.

Bomb-Loads of "Success" in Yemen

Not content with being "led from behind," Saudi Arabia, Egypt an several other Arab nations took matters into their own hands by opening up an air campaign against Yemen rebels.
The Yemeni president fled the country by sea.
And the news keeps getting worse.  Apparently, US-Yemeni intelligence material may have been compromised.
Meanwhile, inside the Beltway Bubble, the Obamunists continue to parrot the Big Lie that Our Dear Leader's counter-terrorism efforts in Yemen, are a success.
Even ABC News is astounded by such a proclamation.
Posted by Ted Henkle at 6:00 AM No comments:

Travelers to Tunisia "...Must Be Cautious."

Now the Tunisian meccas of sci-fi fandom truly are wretched hives "...of scum and villainy."

Of course, our government hasn't been helping matters.  After last week's attack on the Bardo Museum (new footage has now been released), the State Department issued conflicting Tweets as to whether or not it's safe to travel to Tunisia.

Very few writers I know have talked about the attack against Charlie Hebdo, (or at least I haven't caught any on-line message traffic).

I wonder how many Star Wars fans will talk about this?

How long will the "dead canaries in the coal mine" be ignored by our society?

You may be getting more than you bargained for in your mocha.  The CEO of Starbucks is urging his baristas to badger customers about race relations.

Latte lovers took to Twitter urging everyone to "race together" to other coffee shops that will simply serve hot beverages without hot-button topics.


Our Dear Leader is a sore loser.  Because the newly re-elected Bibi is concerned with Israel's survival, he's not all that enthused about a "Two-State Solution" with hostile Palestinians.

For this, Obama feels we need to reassess our relationship with Israel.  There's even talk of imposing sanctions.

Meanwhile, American and Iranian negotiators are quibbling over the number of centrifuges Iran should possess.


Especially since Iran is at the epicenter of the ongoing collapse of the Obama-Hillary "Smart Power" foreign policy.


No matter how many "reset buttons" are pushed, Obama is held in contempt by leaders across the middle east.
Posted by Ted Henkle at 7:30 AM 2 comments:

Team Obama picked a fight with the wrong prime minister this week.

After a two days of petulant silence from the White House, and obtuse remarks by Obama lackeys, Our Dear Leader finally called Bibi to offer his congratulations on winning re-election.

This, despite despite a possible effort from our own State Department funding an anti-Bibi organization.

I'm enjoying Israel's election results almost as much as I reveled in the outcome of the "Red Tsunami" back in November (2014).

I shared both of these Townhall political cartoons on Facebook.  The first one, by Gary Varvel, I called "Changing Channels at the White House," while the second one by Lisa Benson, I called "Hoping On-Board Israeli-One."

But the real "fun" will be watching how the US-Israel relations will evolve over the next 22 months.

Leftist like to paint conservatives as unfeeling towards the plight of the poor.

It's not that us conservative types are cold-hearted, we just look at the cold-hard facts.

The Elders of Seattle seemed to have overlooked those "...stubborn things..." when they decided to jack-up the minimum wage to $15/hour.

Already, Emerald City is losing its luster as businesses downsize or relocate altogether.

Either way, the ones who will be most affected will be the same people the wage hike was suppose to help.

Last week another scandal involving the US Secret Service (USSS) came to light.

This time, the USSS Director will face a Congressional committee over an incident involving two drunken agents disrupting a bomb investigation at the White House.


The image of the USSS has certainly taken a beating since Obama was sworn in.


Makes me wonder, as the Romans did:  Quis custodiet ipsos custodes? (Who guards the guardians?)
Posted by Ted Henkle at 6:00 AM No comments:

I'm sure in the days ahead, we'll learn more of the tragic details.

Posted by Ted Henkle at 6:41 PM No comments:

The Dems Double-Standard Dance with Dictators


Last week, while Hillary was in hot water for misuse of electronic mail, Republican Senators stirred up trouble, from Democrats and Iranians, for sending a letter to the Iranian government, reminding them Congress ratifies treaties.

Of course, when reminded of her past appearance on Dancing with Dictators, Nancy Pelosi claims Republicans sending a memo to the mullahs is worse than her sashay to Syria.

Meanwhile, our current e-mail complying Secretary of State, John Kerry, just about admits the Iran Nuke Deal is bogus.
And Our Dear Leader claims to be embarrassed by the 47 senators who sent the letter.
Of course, Obama doesn't really have any room to talk...
Posted by Ted Henkle at 7:30 AM No comments:

Sending in the Second Stringers for 2016?

It may be too early to tell if Hillary's e-mail mess derails her presidential presumptions.  While us like-minded folks can hope for such an outcome, especially since she's more vulnerable than her supporters realize.
But Clintons have a habit of landing on their feet amidst scandals that would doom lesser beings.
So if Hillary is dethroned before the coronation, this may leave the DNC with slim pickings.


This past week I was in my hometown visiting my mom, who's in the hospital.  She was admitted because of pneumonia-like symptoms, wound up with hernia-repair surgery, and is now undergoing physical & occupational therapy.

While I've been off-line, the Clinton Camp as been on-line conducting damage control over Hillary's private e-mail server and messages.

Sure, there's other stories out there.  The world continues to turn and burn, especially in Ferguson, MO, where two police officers were shot the other day.

But Hillary's e-mail woes is still dominating the headlines.  After all, it was the Washington Post that broke the story about the Clinton Foundation accepting money from foreign donors, (while Hillary was the Secretary of State); and the New York Times unearthed Hillary's secret server.

Neither of these newspapers have been known to be part of the "vast right-wing conspiracy."

So there's plenty of stories out there to choose from.  Even Time Magazine is critical of "the Clinton Way."


The Diplomad, a retired foreign service officer, reminds us the Clintons are up to their same old tricks.  But even he admits the story is getting weirder.

Meanwhile, Mark Steyn warns us of the consequences of our nation putting up with Hillary's audacity, followed-up by her "phonewall stonewalling."


Nor is Hillary the only one who's conducted on-line obfuscation.  VDH asserts there's an E-gate Epidemic raging through the Obama Administration.
There's so much more I can say about this.  But after spending a day catching-up on news, I'm suffering from Clinton Fatigue.
Hopefully, the American voters will feel the same way as the 2016 Campaign ramps-up...
Posted by Ted Henkle at 7:30 AM No comments:

Hillary Clinton isn't the only one with e-mail woes.

As of last week, 32K e-mails were recovered in the IRS Targeting Probe.

So Obama's war on transparency rages on.

But getting back to Obama's presumed successor:  We know about Hillary's e-mail obfuscation thanks to liberal media agencies.  It was the New York Times that broke the story of Hillary's exclusive use of her personal e-mail account.  Then it was the Associated Press that discovered, not only did Hillary use her personal e-mail account during her entire tenure as Secretary of State, but all her messages were routed through her own server.

Now the Washington Post has piled-on and declared:  Hillary has poor regard for the public trust.

That's putting it mildly.  The common theme in every recent article is that the Clintons consider rules are for little people.

But until every bit of electronic correspondence sees the light of day, Hillary will continue to live her live in the shadows.

This past Sunday, rumors abounded about Hillary Clinton jump-starting her 2016 presidential campaign sometime next month.

But two days afterwards, another Clinton Scandal emerged:  During her tenure as Secretary of State, she conducted all on-line correspondence through her personal e-mail address.

It looks like the "Parade of Phony Scandals" may have a new Grand Master by 2016.  I wish I could say I'm surprised, but Hillary is merely copying the on-line habits of others.

So much for a transparency.  Only the non-FOX News agencies still believe in it.

Does this mean Hillary's possible claim to the White House Throne is doomed?

The Clintons are adept at weathering scandals.  It's possible that Hillary slide into the Oval Office on the momentum of a "girl powered" campaign.

While Hillary continues to mull-over her decision on running in 2016, the White House and State Department are conducting damage control.
Posted by Ted Henkle at 6:00 AM No comments:

I Agree With Bibi...

I was able to watch most of Prime Minister Netanyahu's speech before Congress yesterday.  The one that's been giving the Obamunists a rash of pre-speech jitters for weeks.

Especially since Obama's negotiations with the mullahs is going so smoothly:


Bibi vowed: Even if Israel stands alone, Israel will stand.

Of course the Democrats, who boycotted the speech, reacted like scalded cats.  In a post-speech press conference, Congressman Yarmuth said Bibi "...can go home."

Oh, he will--once he's properly attired for the occassion:

The Cost of Crossing the Czar 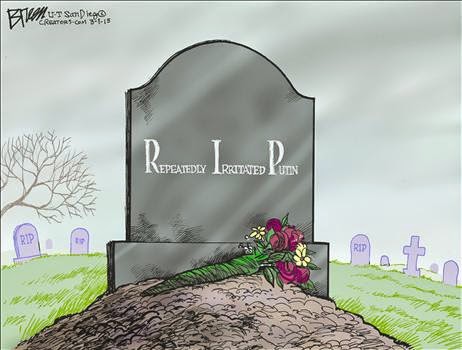 This past Friday (27 February), Russian opposition leader, Boris Nemtsov, was shot and killed.

Speculation is high that Vladimir Putin had something to do with the murder, or at least knew about it.

Since then, there's been protests in Moscow and the late Nemtsov's model girlfriend broke her silence
Posted by Ted Henkle at 6:00 AM No comments: