The New Order is Upon Us

Shortly after the Capital Building Boogaloo on 6 January 2021, Twitter permanently banned Our Drunk Dialer in Chief on the flimsy excuse he "incited violence" with a couple of tweets.
Just about every other social media outlet, many I've never heard of, banned, suspended, or restricted Trump's access to their platforms.  (And the authors of this particular article appear to be okay with this).  Search engine, Firefox, which my agency uses, joined the Stalinists.
While Big Brother Tech is trying to stifle Our Grand Nagus' ability to reach out to his supporters and conservatives in-general, dictators, terrorist sponsors, communist regime mouthpieces, criminals and all-round hate-mongers still have their accounts open.
Even trends like "Hang Mike Pence" were (still are?) allowed to continue.

To paraphrase Orwell:  Some social media users are more equal than others.

Welcome to The New Order...

...where the Woketard's Purge is just beginning. And it won't stop with Big Tech.

Social media has become more leftist over the years...

...and became emboldened after banning Trump by initiating a Lib-Fascist Purge over the weekend.

It's being said "thousands" of rank & file conservative accounts were deleted over the weekend.  (Sorry, I have no exact numbers on this claim)

In response, Our Grand Nagus managed to skirt the ban briefly enough to tease "a big announcement."

Rush Limbaugh didn't wait to get purged, but deleted his own account before the algorithmic commissars could do so.

I'm appalled that published authors, some I know or have at least met personally are cool with censoring Trump, MAGA Hat Wearers, Republicans in-general.  Ironically though, the ACLU, (no fan of Trump) understands the slippery slope we're sliding down.

Small-time bloggers (say, less than 1,000 dedicated followers), like The Diplomad and Stilton's Place, wonder when their site will be cast down the Virtual Memory Hole.

I'm wondering the same thing myself.  I think what's "saving" me for now is the small size of my audience.  But like Diplomad and Stilton, if the censorship and purging continue as we fear it would, I don't think I'll be able to keep "flying under the radar screen" of the algorithmic commissars for very long.

When the time comes for me, or any of you in these opening days of The New Order:  Dance to the line. 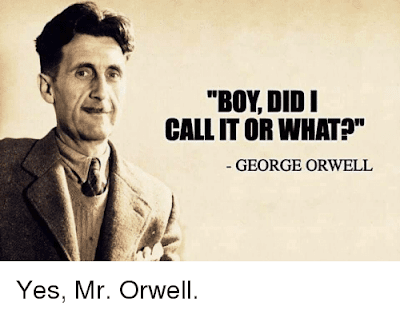