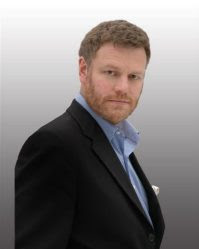 One of my favorite commentators is Mark Steyn, pictured here. For the past two days he hosted the Rush Limbaugh Show, while Rush rushed out on vacation.

One of the topics Mark commented on, was President Obama's campaign promise to "repair America's image among the world."
Here's what Mark had to say about the Oval Office's damage control procedures:

One big reason for electing Obama is he was supposed to repair America's relations with the world. So, how's that working out so far? Well, India says Obama is 'barking up the wrong tree'; Europe says Obama is plunging the world into depression; Canada says Obama is on a march to insanity; Kyrgyzstan says, 'Yankee go home'; and Iran says, 'We have lift-off.' Congratulations, President Obama. -- Mark Steyn
Posted by Ted Henkle at 7:37 AM