When Will the North Korean Madness Stop? 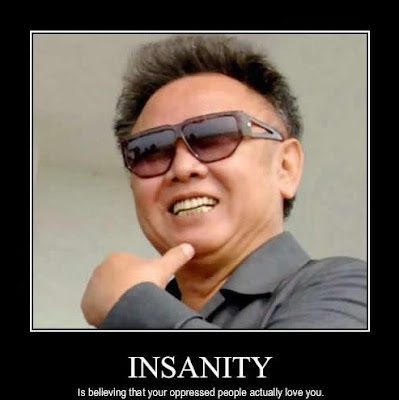 A dire warning about the rising tensions on the Korean Peninsula:
http://news.yahoo.com/s/ap/20101213/ap_on_re_us/us_us_north_korea
And what will we do?  One friend suggested it will be "the usual:"

I'm sure we're getting the Word File all prepared and spell-checked with our next stern note. Which will be diluted to a calm reprimand….which will be watered to a gentle reminder that war hurts..which will suddenly become a US-ROK apology before it is actually delivered to Pyong Yang.
I'm just as in favor of diplomacy as the next guy. But I am so tired of this stupid dance. The next time something like a NORK shelling takes place, somebody needs to find their bollocks and remove the source of the attack from the map. Then we can follow up with all the notes we like.

And another responded with:

Well...this particular next guy is not all that much in favor of diplomacy as it is currently practiced by the U.S., because diplomacy does not work when the goal of one side of the negotiations is not to actually get the best deal for itself but rather to keep the process moving and doing what is necessary in order to keep the other side onboard and at the negotiating table (i.e. just like the ongoing "stupid dance" with North Korea). And, unfortunately, that's pretty much what American diplomacy has devolved to nowadays across the board (as is pretty evident from all the purportedly official State Department cables leaked by that internet organization-which-cannot-be-named (cables whose validity, of course, can be neither confirmed nor denied).
Which is ultimately the reason I think it is foolhardy for the U.S. to be continuously engaged with the rest of the world any more than is absolutely necessary, because almost by definition now our engagement with virtually everyone (except our friends, whom we eventually betray) consists of concession after concession after concession for minimal to no benefit to ourselves. Unless there is some revolution in the way the U.S. conducts its foreign policy, which I don't foresee, why on earth are we continuing to play a game at which we are continually sabotaging ourselves such that we cannot win?
Posted by Ted Henkle at 3:00 AM