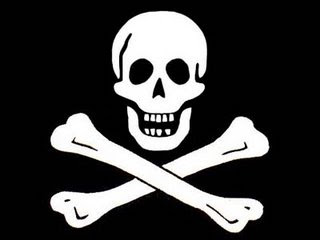 "International law has long recognized a general duty of all nations to cooperate in the repression of piracy. This traditional obligation is included in the 1958 Geneva Convention on the High Seas and the 1982 LOS Convention, both of which provide: "[A]ll States shall cooperate to the fullest possible extent in the repression of piracy on the high seas or in any other place outside the jurisdiction of any State.""

It sounds like there's already a mandate in place to deal with these scurvy dogs. But as usual, the international collective doesn't have the will to enforce it.
I've added the Global Security's website to my Defense Links. Here's their detailed report on the current pirate problem:

BTW: The "Jolly Roger" flag as we know it today and pictured here, is just one of many variations. Each pirate captain had his own personal standard. This one belonged to Edward England.