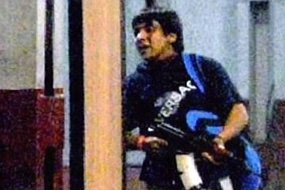 Mark Steyn's recent article in the "OC Register" makes a valid point: That we're not seeing the proverbial forest through the trees. Too many analysts and pundits are splitting hairs trying to figure out which terrorist group is responsible for the attack on Mumbai. However, they're all missing the religious-political ideology that's driving this. Even if we do properly identify the group responsible all we'll be doing is treating a symptom and not the disease.

Mr Steyn also pokes fun at the Rueters reporter who refered to the subject of this photo as a "suspected gunman." Orwellian PC at its finest.

Apparently, this "suspected gunman" was the only one, out of 10, captured. He's currently talking to authorities. The defense links on this blog discuss the "failure" of the terrorist operation (they planned to kill 5k people) and the Indian government's response.
Posted by Ted Henkle at 7:18 PM