I first heard about the Case of the Covington Catholic High School Kids from a coworker while I was on duty Saturday night (19 Jan 2019).

He mentioned in-passing about a claim that some white kids wearing MAGA hat harassed a Native American elder had been debunked.

I thought that would be the end of the story.

It wasn't until a couple days later, after fully waking-up from a night shift, that I realized just how extensive the fake news smear campaign waged against the Covington Kids was.

Since my initial post a couple days ago, more backlash articles, videos and YouTube commentaries sprung up in defense of the Covington Kids.

The Covington Catholic High School was closed on Tuesday (22 Jan 2019), due to threats against the students and the school in-general.

One Chaperone said their kids were targeted.

Some celebrities tried walking back their attacks. Sort of.

But the Covington Kids are still guilty by many leftists of being:


Mo Mo tweeted this in response to NBC News' accusation: 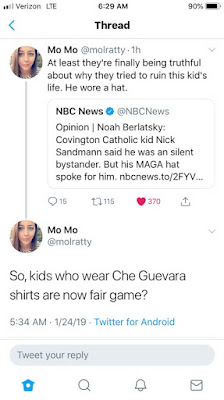 So far the only half-assed retractions made by the media networks and publications has been over Nathan Phillips' lie about being a Vietnam War veteran.  However, they are still carrying his crying wolf of harassment claim.

In fact, as the Amazing Lucas pointed out in a follow-up video, the media tripled-down on the Covington Kids.

The controversy, or as Tim Poll asserts, Civil War 2.0, was the led story in Daisy Cousens' This Week in Social Justice (Fails).

Sargon of Akkad showed how leftist biases were "confirmed" by playing devil's advocate in his Covington KKK video.

Many leftists continue to go full-libtard over this fake news about racism, which Derek Hunter called it the soft bigotry of liberal preconceptions.

However, like Mark Steyn earlier, Tucker Carlson outed conservatives on his show a few nights ago who joined the virtue signal stampede.  He concluded this incident was our elites having power and crushing anyone who opposes them.

Since both sides of the social-political divide got triggered over this fake news fracas, Steven Crowder laid-out the Top Three Lessons of the MAGA Hat Kids Hoax.

Let's see if anyone adheres to it.

I must admit I never read George Orwell's 1984.  (We read Animal Farm in our high school English class instead).

So during these past few days I learned another creepy, Orwellian term to describe what the Covington Catholic School Boys were "guilty" of: 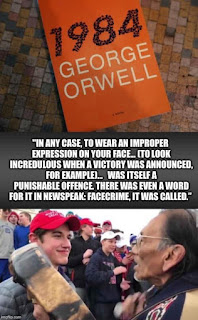 Fortunately, there seems to be a growing push-back by conservatives.

Vincent James called the incident The Smirk That Awakened the Masses.

And Lauren Chen said lawsuits may be in the making.

Kurt Schlichter thinks the Covington Kids have a case (but it won't be an easy one).