Shameless Self-Promotion Bubbles to the Surface 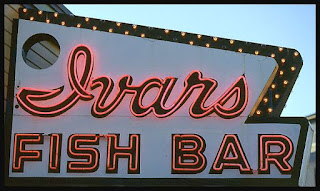 Shameless self-promotion plunged to new depths in Seattle. Or at least back in 1955 they did, when Ivar Haglund, founder of Ivar's restaurants, had several underwater billboards placed in Elliot Bay.

Ivar's is a well-known chain seafood & chowder chain with restaurants ranging from the upscale to fast-food joints.

Seattle's 4th of July fireworks display is usually sponsored by Ivar's, but apparently the founder had other promotional plans for his restaurant: