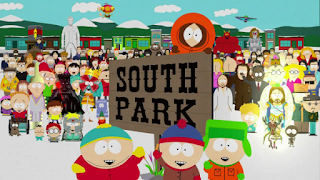 I'm not a regular fan of South Park.  Sometimes I even find their programs over-the-top and out of line.  But most of the shows I've managed to see I found to be laugh-out-loud funny.  And the producers of the show pride themselves on being "equal opportunity offenders."

That is, until the subject turns to Islam and its prophet Muhammed:

Even the non-conservative, LA Times had some tempered criticism over the bleeping controversy:

The irony is that some of the group's postings could be construed as hate speech and therefore raise their own free-speech issues.

While the network bleeped out "Muhammed," the creators aren't backing down and stand by their work:

I'm really sad to see an American network caving in to such intimidation. Since 9/11 our enemies have learned that if they launch a massive attack against us, we'll respond in kind. (Maybe even this administration would be forced to respond).  This only reinforces in their minds that we're unwilling to defend our basic principles and are completely vulnerable to a "death of a thousand cuts."

Other comments by friends:

South Park was one of the last bastions of the freedom to be truly offensive to any and all. This is a dark day...

Needless to say, bashing all other religions is still OK.

A lot of people say that this conflict or war or whatever you want to call it will not be won militarily. Well, I guess that same logic applies to the bad guys as well and in the sphere of non-military victories, they just won a big one....
Posted by Ted Henkle at 8:00 AM