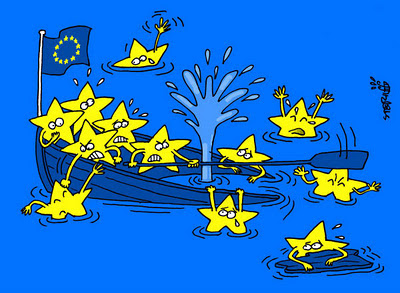 Nigel Farage, rips into the non-elected EU-rocrats in this YouTube video.

While in this episode, he warns Iceland to "save themselves."

After watching Mr. Farage lay into the EU's "supercommitte," someone came up with the great idea of making him a US citizen--so he could run for Congress.

Comrade Karla had this to say about Mr. Farage:

He rocks.  He's been the bane of the EU for some years now.  He's dead on...and as usual, the EU-weenies are impervious to logic. The stuff he's talking about was clear as early as the 80s where things were going.

And for the EU in general:

At its very heart, the EU has always been Soviet Union 2.0. In the 80s, all the unelected Eurocrats set this edifice in place--and publicity was almost nil. Nobody heard about it; nobody knew about it. Then, in the early 90s when they began to implement some of this stuff, some member states pushed back (the Danes rejected the open borders stuff in 94).

But like any good dictatorship, they just kept holding refernda until they got the result they wanted. The public in Europe (which in the broad scheme of history is a mixed bag on actual, functioning democracy) have been seemingly unable to do anything about it.


The ruling classes are for the most part very much conditioned to worship at the altar of the EU. Unfortunately for Europe (and by extention, the rest of the west), Farage is a minority. This might change. Hard to see how, at this point.

While another friend made this observation:

It's going to change (for better or worse) if the EU collapses or starts to dump members.

Which led me to the cartoon I used in this post.
Posted by Ted Henkle at 10:05 AM