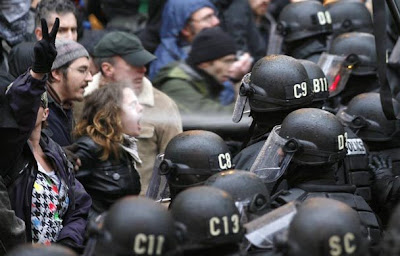 (Image: From the Seattle Times)
Yesterday evening, at the height of rush-hour, Seattle's OWS Franchise decided to occupy University Bridge.

I noticed, the reporter(s) didn't interview any irate commuters, who had their lives disrupted because of these moonbats.  While there are some supporting comments after the article, the majority I saw were negative.  This is something I've noticed in a lot of politically-charged stories in the Seattle Times, which could be an indicator on just how small the liberal minority truly is.

So not too many of us feel sorry for any of the protestors getting a dose of pepper spray, like the gal shown above at yesterday's Occupy Portland vs PPD skirmish.
Posted by Ted Henkle at 10:35 AM