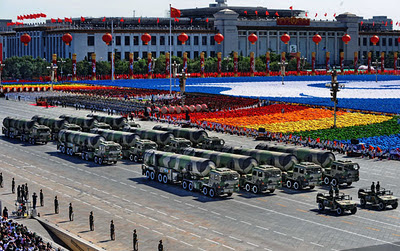 (Image:  Chinese ICBMs on parade)
Apparently, the Peoples Republic of China (PRC) hasn't been all that forthcoming about their nuclear capability.  According to today's Washington Post article, a bunch of Georgetown U student's managed to uncover evidence of an extensive underground network China is using to shelter it's larger-than-previously-assumed nuke arsenal.  The Chinese even have a nickname for it:  The Underground Great Wall.
In addition to this disturbing news, a number of points irk me about this article.
First, is this quote:
But the strongest condemnation has come from nonproliferation experts who worry that the study could fuel arguments for maintaining nuclear weapons in an era when efforts are being made to reduce the world’s post-Cold War stockpiles.
I grew up during the Cold War and I've never been able to understand the nuclear disarmament activists.  On paper, their cause sounds like a noble endeavour.  However, it's always America--a free, democratic nation--that always draw the ire of No Nuke crowd, never the totalitarian regimes that posses them.  Or in the case of Iran, are hell-bent on possessing them.

Even now, these "experts" appear to be more worried about the US and it's allies deciding to maintain--or Heaven forbid!--increase their nuclear arsenal.

I guess they want to shrug it off as the PRC "not getting the memo."

It’s not quite a bombshell, but those thoughts and estimates are being checked against what people think they know based on classified information...

Not quite a bombshell?  Really?  I guess it's not bombshell-worthy, because the media can't tie this to Sarah Palin, Michelle Bachmann, Herman Cain or Newt Gingrich.
Posted by Ted Henkle at 7:25 PM