So. What Are We Going To Do About It? 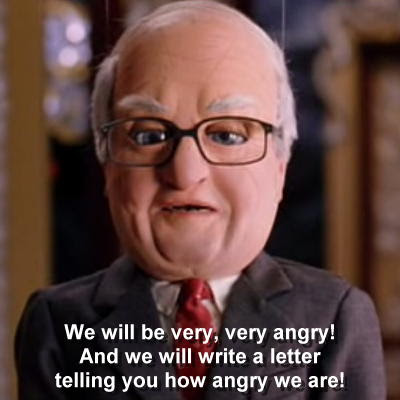 (Image:  "Hans Brix" in Team America)
A plot to assassinate the Saudi Ambassador to the US was uncovered the other day and all indications point to Iran.  An operative was caught attempting to gain material support from a Mexican drug cartell, according to Yahoo News.  It looks like Iran is upping the ante, according to FOX News.
And why not?  America hasn't had such a wimpy president since Carter, says James Jay Carafano in this article in the NY Post.
Despite State & Justice Department officials promising Iran will face our righteous wrath, this also harkens back to another wimpy administration.  One friend pointed this out and sparked the following discussion...
The timing of this is pretty suspicious. Same day as the subpoena for Holder to go before the House to testify about fast and furious. Very reminiscent of President Clinton's bombing runs on Serbia the same day as eventful days during the Monica Lewinsky scandal.

You read my mind.

[My wife] had a great observation tying this to the Iranian assassination plot in the US -- she asked if the Mexican drug cartel to be hired by the Iranian agents would use Fast and Furious weapons to pull it off.  I did like how Holder ran away from the mic when asked about Fast and Furry-us...

We're going to do the same effective response we always do: Call on the International Community to register their disapproval of Iran's actions. Unfortunately, we don't have diplomatic relations with Iran and so can't use our preferred method of response which is to sent a strongly worded letter to their government.