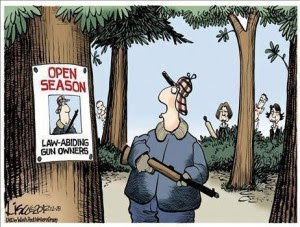 Earlier this week, the Journal News found itself in the epicenter of a firestorm.  One of its reporters thought it he was doing the good citizens of the New York City area a great service by posting the names, addresses and contact information of law-abiding gun owners in the NYC Metropolitan Area.

Gun owners and non-gun owners were not amused.

One blogger retaliated by posting the names, addresses and contact info of Journal News employees.  On an intellectual level, this is a case of two wrongs not making a right.  Emotionally, I'm happy the Journal News minions are on the receiving end of this media/internet backdraft, short causing actual harm, of course.

While the Journal News hit rock bottom, it has started to dig.

Along with this breach of privacy by an outlet of the Ministry of Truth (formerly known as the Mainstream Media), Senator Feinstein is leading the hue & cry to introduce a New & Improved Assault Weapons Ban before anyone has fully recovered from their New Year's Eve hangovers.

Sensing a change in the politically correct winds, Dicks Sporting Goods not only stopped caring "assault" weapons, but even reneged on previous orders.

Meanwhile, the Ministry of Truth is also pulling out the stops to tar & feather the NRA. Fortunately, this hasn't hurt the reputation of the NRA, which is actually higher than the media's.  Rich Lowry goes one better and poses several Questions for Gun Controllers.

It looks like 2013 will get off to a rocky start--even if we survive the plunge over the Fiscal Cliff.

And speaking of getting off, hopefully, the gun-grab grandstanding will turn out as Comrade Karla Senior says: