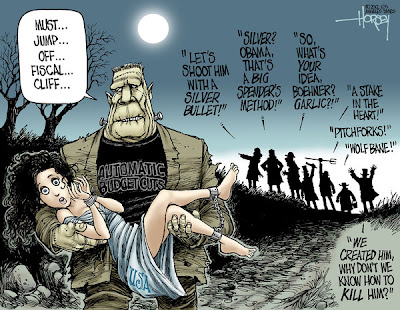 (Image by:  Horsey)
Most of the informed voting pulic are aware of the looming Fiscal Cliff we're approaching at the end of the year.
Congressional Republicans are attempting to thwart the Democrats' plan to raise taxes.
But is this a battle that should be fought?  Especially since Obama, with the help of the media, will heap all the blame on Republicans.
Some commentators are advocating to let the Democrats win this one--in order to win the fiscal war.
Ann Coulter suggests this will make the Democrats own the Obama economy.
Because, as Charles Krauthammer said, it's not about fixing the economy.
While John Nolte shares his Top 5 Reasons for the Republicans to let this happen.
And since we're past Halloween and nearing Christmas, here's a more seasonal image... 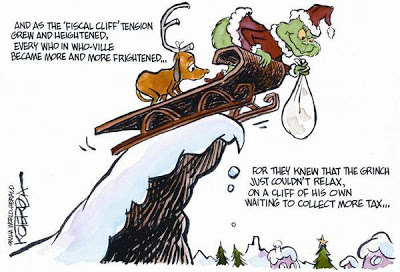