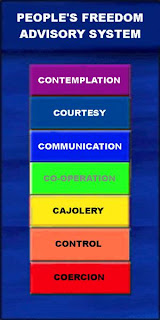 One of my favorite humororist, Lileks, responds to a social engineering manifesto sent to him by Amitai Etzioni.

In his ScreedBlog, Lileks rolls-in on each point made by the Social Engineer Commissar.

Terms like "social justice" can now be added to "political correctness" and "climate change" as ones I'd like to see stricken from our vernacular. I found this handy-dandy "People's Freedom Advisory System" on-line. I think we're in high Yellow/Cajolery and could easily slip into Orange/Control.

Lileks' posting was brought to my attention thanks to Comrade Karla, who had this to add:

This is long, but very instructive. Lileks pretty much unmasks the neo-marxist prattlings of a "new progressive." This issue isn't a new one, historically speaking, but it is disturbing that in 2009 there are still people out there who think the solution to society's problems is to decide who gets what.Reminds me of that scene in Dr. Zhivago where the good doctor tells his NKVD cousin that "I envoy you…you put society on a table like a human body and cut out injustice like a doctor." No thanks.

I'd rather not see our society and way of life "operated on" either.