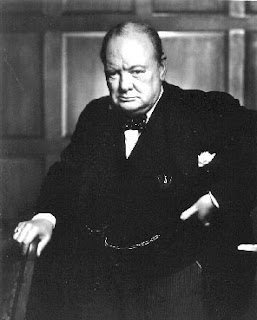 On March 5, 1946 Winston Churchill gave his famous "Iron Curtain" Speech at Westminster College in Fulton Missouri. The speech opened the eyes of many to the realities of the fate of Eastern Europe and the true nature of the USSR.

A generation later, President Ronald Reagan was criticized for calling the Soviet Union "an evil empire;" while President Bush was ridiculed for calling Iran, Iraq and North Korea an "axis of evil."

My like-minded friends and I think "the Gipper" and "W" were spot-on in their assessments.

Here's a link to the full content of Churchill's famous speech:
http://history1900s.about.com/library/weekly/aa082400a.htm
Posted by Ted Henkle at 5:34 AM

Email ThisBlogThis!Share to TwitterShare to FacebookShare to Pinterest
Labels: History