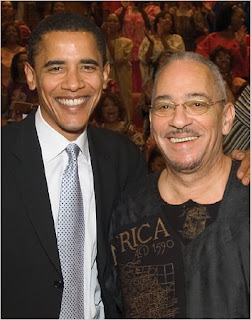 The Reverend Wright, that is. Today's post on Theodore's World, a site linked here under Commentator Blogs, has a disturbing post today:

Neither Reverend Jeremiah Wright nor William Ayers' association with our Community Organizer-in-Chief's past is mentioned in Wikipedia.
According stories submitted to Theodore's World, anyone trying to upload information on these two characters have their posts deleted within minutes and they're posting rights suspended for 3 days.

I can't verify the information regarding any strong-arming of cyber-authors by the Wiki Commissars.

Instead, what I did was search for information--or rather lack thereof--on Wikipedia itself. (Normally, I'd say I went "right to the source" but Wikipedia not a primary source for research in the first place). I must admit I didn't read anything on Obama's Wiki entry. I heard it all during the election campaign. Instead I merely conducted a key-word search for "Ayers" and "Wright." But lo & behold I found--nothing. Nadda. Not even their mugshots. Nor did I find anything about "ACORN" or "tax evading cabinet nominees" entered either.

Wikipedia articles often contain a Controversies Section. I read one the other day regarding the science fiction boardgame Starfleet Battles (SFB). Since the game debuted back in 1979 there's been intermittent legal battles over intellectual property issues.

Now if Wikipedia is willing to air some game company's dirty laundry, why not do the same for the Office of the President? Especially since the controversy swirling around the Obama-Ayers-Wright Triumvirate made national news during the 2008 Campaign; while the legal infighting among game companies and their employees are known only to a handful of sci-fi gaming fans.
This certainly gives the impression of a subterranean white-wash campaign while everyone's attention is focused on the "Stimulus Package" boondoggle battle.

Another curious feature about Obama's Wiki article--there's a padlock symbol and the following title:

"This page is currently protected from editing until disputes have been resolved."
And when will they be resolved? 2012? 2016? Never?

Here's the Theodore's World post that initially drew my attention: