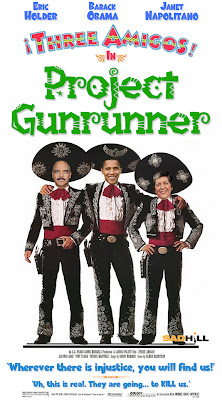 Thing got hot under the Capital Dome during yesterday's committee hearing over Operation Fast and Furious.  Eric Holder is refusing Republican calls for firing any "top men" in the Justice Department (DOJ)over this scandal.
This makes me think back to Watergate, where the Nixon presidency imploded over the mere break-in of the Democratic National Committee (DNC) Headquarters.  Unlike Fast & Furious, which is responsible for the death of one Border Patrol Agent and hundreds of weapons in Mexico still unaccounted for.

More than a handful of DOJ lackeys should loose their jobs.
Posted by Ted Henkle at 4:30 PM