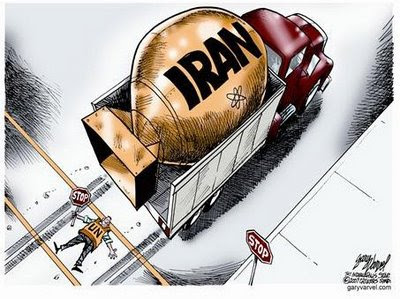 (Image by Gary Varvel)
In a rare moment of bipartisanship, the US Senate voted 100-0 for sanctions against Iran's central bank, or anyone doing business with it.  With such unanimous support, you'd think Our Dear Leader would follow through with this whole Will-of-the-People thing.
Think again.
Obama, however, wants to soften the blow, such as it is, against the mullahocracy, according to Roger Simon writing for PJ Media.
This tidbit of "leading from behind," brought out the following comments:
Not that it hasn’t been obvious for some time that this administration is terminally stupid on this topic, but still.


I thought it was the little people unfairly hindering the Greatest President Ever™ in his wondrous, brilliant genius.
Posted by Ted Henkle at 4:45 PM