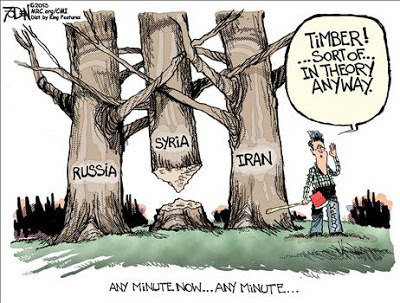 Last week Syrian President, Bashar Assad, was "confident of victory" over the rebels.

No wonder, since his regime has been getting support from Russia and Iran.

But this isn't the first time that major players, or major player wannabees, have gotten involved in someone else's civil war.  Michael Ledeen points out that what's unfolding in and around Syria is similar to the Spanish Civil War.

While Iran and Russia are openly propping-up Assad's dictatorship, Michael Fernandez warns what a sinkhole this will be for Obama & Co.

These tidbits o' info sparked this lengthy discussion between two of my friends:

Perhaps, but the idiots in the US who leaked that Israel attacked them forced Assad's hand -- previously, he has pretended attacks never happened and the Israel's did likewise. With (rather lame, admittedly) plausible deniability, he could get away with inaction. No longer.

I'm more concerned that it seems that Assad, with heavy duty assists from Hezbollah and Iran, is finally starting to beat the opposition. While I support neither side, per se, I really would've liked to see the Iran-Syria-Lebanon axis broken, specially before Iraq becomes a full fledged part of it....The Sunni/Arab-Shia/Persian civil war is really starting to heat up now!


My hope is that even if Assad “wins,” he’s going to have a long-term insurgency on his hands—Syria will be about as stable as Iraq is becoming (thanks to the fecklessness of The One and the Dems/1920s GOP members in general).
I concur on the leaks—Obama only likes leaks that he thinks will enhance his image/standing.  Anybody else will attract the ire of Darth Holder.
Hopefully the Hezbos and their paymasters will get tied up/distracted by the anti-Assad insurgency.  We could stir the pot with assistance.  I suspect the Israelis are probably already doing stuff like this.  Hopefully they’ve learned not to share sensitive intel with us in that regard.

I would think the deep-pocket Saudis and GCC states would be able to send all the weapons required, but maybe not. I'm not savvy on real-world arms trafficking.

If nothing else, for Iran, this has pushed their nuke program out of the news for a good long while now.
Long tem, I am also concerned how Russia continues to go out of their way to F- with us, and once again are getting away with it. Vladimir is going to get too big for his britches soon if this keeps up, as he doubt already believes we are weak and feckless (and we are, sadly).

The Russian leadership continue to live in some sort of dream world where it’s the 1970s or 80s and they’re the Soviets. Given the drastic changes to the world landscape since 1990, and Russia’s relative military strength, it’s a mystery to me why they are doing this. Then again, our ueber fecklessness, combined with NATO’s flaccid approach to foreign affairs is no doubt encouraging them!

A friend of mine who is married to a Ukrainian and has been to Russia several times recently said that not all of the Russian public are buying Vlad’s shtick—but enough of them obviously still do that he has not been challenged in a meaningful way.
Then again, if you kill or imprison all your potential political opponents, it rather stacks the deck.

The pieces of this "Spanish Civil War Redux" are still in play.  How the game will end is anyone's guess, but it looks like Assad's forces have gained the initiative and are on the offensive.
Posted by Ted Henkle at 6:30 AM