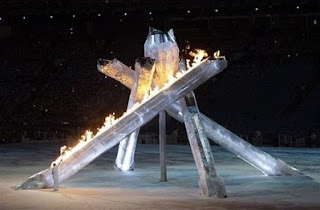 Last night the 2010 Winter Olympics came to a close.

My wife and I made a last-minute, overnight trip up to Vancouver, BC, to watch the short track speed skating (26 Feb).  It was the most intense sporting event I ever attended!  Prior to that, I managed to catch snippets of the games on TV, like the vast majority of folks.  Even without the Olympic hoopla, Vancouver is a beautiful city and I'm glad my wife and I had the opportunity to attend such a once-in-a-lifetime event.

Some closing comments from the news agencies, first on the closing ceremony:

The climatic sporting event was he US-Canada hockey game:

While I'd preferred a different outcome, this was one of the best games in any sport, I've seen on TV.

3. The US-Canada Hockey Game, and last but not least,

4. The events I personally attended; which were--the Men's 500 Meter, Women's 1000 Meter and Men's 5000 Meter Relay Races.  Katherine Ruetter won the Silver Medal in the 1000 Meter, while Team USA won the Bronze in the 5000 Meter Relay.  The only thing missing from this experience was hearing our National Anthem played at one of these award ceremonies.

While the Canadians did a great job as a host nation, the American network, NBC's performance earned a "4th Place" medal.  Throughout the course of the Olympics, NBC time-delayed airing nearly all the events until prime time, usually starting at 8 PM.  With today's internet connectivity fans can receive news of their favorite event in real-time.

And for the closing ceremony, NBC cut to a newly hyped program.  4th Place Medal has the details:

Despite the such clunkers, my thanks goes to the people of Canada for hosting such a memorable Olympic event!
Posted by Ted Henkle at 7:40 AM