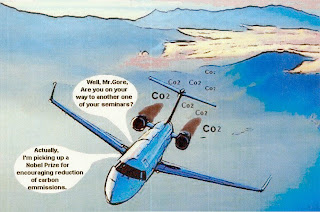 (Image:  By Andrew B., Honorable Mention in the 2007 Political Cartoon Contest on Generation Joshua).


The Climategate Ringleader admits to sending "awful" e-mails.  From the Daily Mail:

However, despite the collapsing house-of-cards, there are still high-profile true-believers hawking their brand of Kool Aid.  Here's some of their comments courtesy of one of my on-line friends:


"Isn't the only hope for the planet that the industrialized civilizations collapse? Isn't it our responsibility to bring that about?"
- Maurice Strong, former Secretary General of UNEP


"No matter if the science of global warming is all phony... climate change provides the greatest opportunity to bring about justice and equality in the world."
- Christine Stewart, former Canadian Minister of the Environment


"The data doesn't matter. We're not basing our recommendations on the data. We're basing them on the climate models."
- Prof. Chris Folland, Hadley Centre for Climate Prediction and Research


"It doesn't matter what is true, it only matters what people believe is true."
- Paul Watson, co-founder of Greenpeace


"Unless we announce disasters no one will listen."
- Sir John Houghton, first chairman of IPCC
Posted by Ted Henkle at 4:40 PM