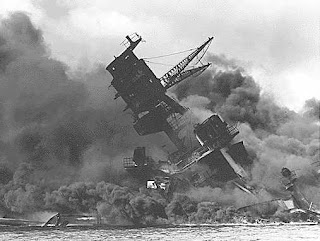 (Image:  The wreck of the USS Arizona after he Japanese Attack on Pearl Harbor)
Another great rebuttal of Tom Hanks' comments:
This is all very bizarre. With regard to the whole, "we wanted to kill each other because we were different" nonsense. Does Hanks even realize that there was a great deal of sympathy in this country for the Chinese because of Japanese attrocities in China and that one of the primary reasons we cut off their oil and scrap iron imports was an attempt at economic coercion to get them to stop waging war on China? Granted Hanks may not even realize that Japan had been waging war on China since 1937 (1931 if you start with the annexation of Manchuria) and that for the Japanese Army, the war in China was the main theater of the war. Of course Hanks may very well think that Asians are inherently peaceful people who never waged war on one another until the Europeans started showing up.

Also, does Hanks understand that Japan was allied with Nazi Germany? They signed the Anti-Commintern Pact in 1936 and signed on to the Tri-Partitie Pact in 1940. That does count for something.

The NYT had a review of the show, overall it sounds like they are taking more of the Paul Fussell approach and it is probably still worth watching as long as you tune out anytime they try and hit you over the head with some sort of post-modern message.
Posted by Ted Henkle at 5:41 AM