Back to the Bathroom Battles 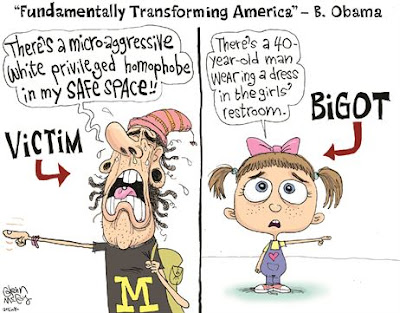 Instead, they're too busy celebrating trans-woman Sarah McBride peeing in a N. Carolina women's rest room.

Her actions remind me of one of my dad's wacky sayings:

You can't fight City Hall, but you can piss on the steps.

At least Miss McBride had the courtesy of using the ladies room, and based on her selfie, can at least pass as a natural-born woman at-a-glance:  Unlike the guy I blogged about three weeks ago using the women's locker room at a Seattle Parks & Rec facility by merely "identifying himself as a woman."

Since then, this "gendermandering" has claimed one of it's first high-profile victims:  Curt Schilling of ESPN got sacked for supporting gender-separated restrooms.  My favorite line in Todd Starnes article was:  Traditional values just got double-flushed.

Seriously, decent parents are very protective of their children.  But now little girls must pee next to grown men, and we're being compelled to agree with this.

This is all about "...abandoning nature in favor of the politics of gender."

Political activists should keep their hands off the ladies' room.


Otherwise, classic comedies such as Monty Python's Lumberjack Song, (along with a whole host of other "gendermandering" issues) or Some Like It Hot will be "gone with the wind."

But by then having movies and comedy skits shoved down the Memory Hole will be the least of our worries.

With such incessant activism, it's becoming more difficult to always look on the bright side of Life...
Posted by Ted Henkle at 6:00 AM