Joining Europe at the Jihadi Abyss 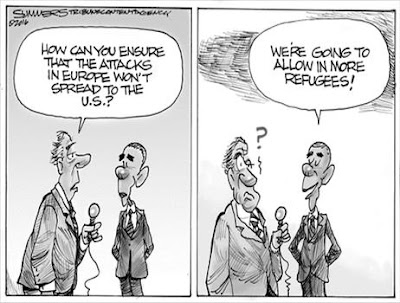 Earlier this week, mandatory evacuation orders were issued for military families in Turkey.  This was in response to the bombings that occurred in Ankara (13 March), and Istanbul (19 March).

This was followed by another car bomb explosion in Diyarbakir, two days after the evacuation order was publicized.

Then came the Brussels Bombings.

It's one thing to evacuate western families from a middle eastern country, but quite another when westerners are attacked by terrorists in their own homeland.

He then goes on and advises that we can still avoid Europe's fate, but only if we take action.

Unfortunately, our present leadership intends to join Europe at the Jihadi Abyss, and ignoring the problem.  This is evident when, for example, White House minions attempt to censor the words "Islamic terrorism" from the French president's recent speech.
Posted by Ted Henkle at 6:00 AM