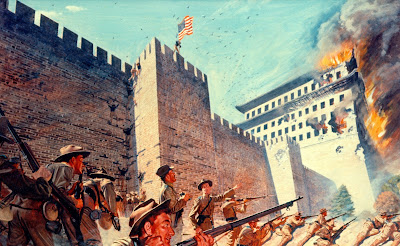 (Image: Siege of Peking, Boxer Rebellion)
President Hu of China is worried that his country is once again being hemmed in by foreign devils.  Of course, we're doing nothing of the sort.  It's not our fault the world finds American culture more appealing than what the PRC's Politburo has to offer.  However, Walter Russell Mead writes just how the come to feel this way in The American Interest.
Comrade Karla pointed out these tidbits that would have added weight to Mead's article:
Imperial Germany used similar arguments prior to 1914, calling it “Einkreisung.” Just sayin’.

But the author might have taken it a step further—China does have an history of being divvied-up and “overseen” by non-Chinese powers—not that anybody’s trying to do that (that I’m aware of), but when trying to reason out a country’s motivations, it’s something that must be considered.

We still kind of suck at doing that.
Posted by Ted Henkle at 2:00 AM