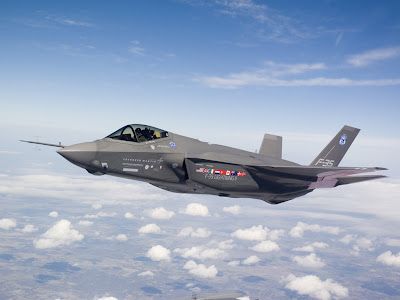 The F-35, like previous aircraft progams, has had it's teething problems.  But a major issue has now come to has come to light. 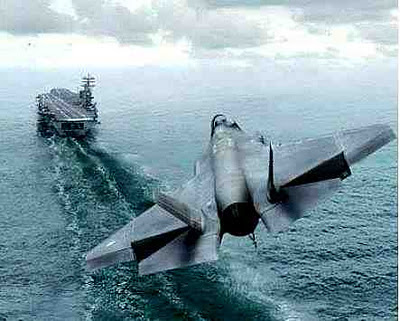 Unlike this computer-generated photo:  The F-35 cannot land on an aircraft carrier--one of the critieria for calling this aircraft a "Joint" Strike Fighter.  Aviation Intel has the story.
Several of my friends were, or still are, in the Navy.  So this story spawned the following comments:
No kidding! This one is particularly scary, because it means almost every weight distribution parameter on the F-35C’s simulated and model-based tests were inaccurate. So I cringe to think what the other 1st, 2nd, and 3rd order effects will be.

﻿I'm hesitant to take this at face value. The F-35 has suffered through a lot of problems but so have plenty of other weapon systems. I have very fond memories of some of the great stuff that people wrote about the B-2 when I was working on that program like, "It won't fly very well because it doesn't have a tail," (thank you Senator Glenn) to claims that the airframe disintegrated when it got wet because of the composite materials needed to make it stealthier.

...the particular issue we were discussing (carrier landing tests) is genuine and accurate and—this late in the program—not a good sign at all. I am sure that 15 years down the road, most people (except GAO and other watchdogs) will have forgotten all the teething pains for the F-35, just as we tended to forget the teething pains from the F-14, F-18, F-16, F-15, B-2, B-1, and just about every major combat aviation program. The principal concern is that those “teething pains” are trending in an ominous direction (much more costly and indicative of systemic management, engineering, and other weaknesses). At least with all the other aircraft I listed above, what we got on the other end made all the previous pain worth forgetting. I am not sure we will be able to say that of F-35, given the expectation gap that surely exists between what industry/DOD posits about what that aircraft will be able to do and what we will actually get in the final product.


Anybody recall reading about ‘teething problems’ of earlier aircraft? Seems like we always had three or four types going all at the same time, each more suitable for one sort of deployment, less for others. Of course, there were many other, different problems to be dealt with in those days, and there were usually greater numbers involved. Today, we have one type intended for many tasks


Not only do we only have one type, but we have no real give in our industrial base to have say, Corsairs and Hellcats. We just have the F-35.


The problem for the F-18 production line is that once the USN stops buying them that is pretty much it because the Australians are the only foreign customer for the Super Hornet. On the Air Force side, the F-16 and F-15 lines are still open because of numerous export customers. However, the USAF does not seem to be interested in more of those. Granted the air frames are a bit dated but with AESA radar, new avionics, and new weapons the 15, 16, and 18 are all still pretty bad ass jets and they are a lot cheaper than the 5th gen fighters - that's why they are still competitive in the global market over the newer designs like the Rafale and the Eurofighter.


I understand that.  Two thoughts; We (Navy) were about to shut the DDG-51 line but didn't so there's precedent and we are the only customer.  Obviously some differences b/t ships and planes, but doable and worth thinking about.  Second, I think industry and program managers over inflate the capabilities of an adversaries weapon systems, particularly aircraft.  I'm with you and agree that the 15, 16, 18 are all good a/c and with our pilots training and experience should be able to wipe the floor with our adversaries.
Having a Wildcat equivalent in case the Buff...I mean "Lightning II" doesn't work out would be prudent.


Mind you, the Buffalo does sometimes get a bad rap—there’s an Air and Space article (IIRC) that was pretty good covering this.  Similar conclusions can be drawn about the P-39. If it sucked so bad, how come V-VS pilots racked up 30, 40 and 50+ kills with it?  Right now we have a problem on an order of magnitude far larger—it seems we’ve shrunk our industrial base to the point where we can only build one or two really high tech things—and if they don’t work, there’s no back up.  So if your P-39 performs below specs, you can’t turn to a P-40 or design a P-51 in short order to fill the gap.
Posted by Ted Henkle at 1:00 AM