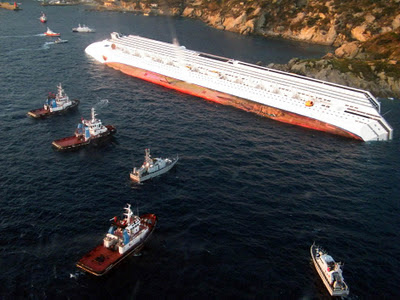 (Image from:  The National Post)
On 13 January, the Costa Concordia ran aground off the coast of Isola Di Giglio.  Last week's National Post contains several dramatic photos and illustrations.

Captain Schettino was one of the first to abandon ship.  However, the behavior of many of the men on board the stricken vessel was equally contemptable.

What does this maritime tragedy say about social norms of the 21st Century?

On 15 April 1912, when the RMS Titanic struck an iceburg, the call went out for "women and children first."  Now it's "every man for himself."  No one clarifies how far our society has sunk than Mark Steyn.

Kind of like the episode of Seinfeld where George was at his girlfriend's son's birthday party and there was a fire in the oven and George went screaming out the door pushing people (including an old lady in a walker) out of the way and later in the show Jerry said to him, "So I guess for you, the idea of women and children first is a little outdated?"


Kind of sad how life is imitating art.
Posted by Ted Henkle at 4:15 AM