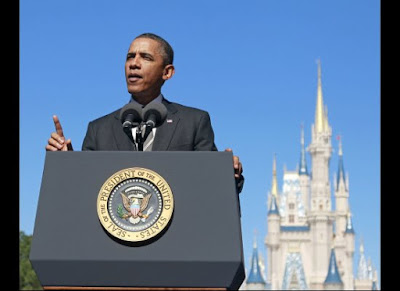 A few days ago our Dear Leader gave a jobs speech at Disney World--right after axing the Keystone Pipeline.  This was wrong on several levels and Michelle Malkin puts it best in her Land of Obama Make-Believe article.
Obama's latest excursion sparked a few great observations from my friends:
...what is the point in going to Disney World to talk about job creation and tourism. If there is one place in the US that is not hurting for tourists, it's freakin' Disney World. Plus, I'll argue that it is incredibly rude and insensitive for POTUS (any POTUS not just the current) to go to a place like Disney World given the security requirements. I'd like to know how many people's vacations got screwed up because of this. How many "working class" families saved their money to take a trip there and in some way shape or form had it disrupted because of all Pratorian Guard like security protection that POTUS gets. I'm sure if Bush had gone to Disney World, we would have been subjected to seven or eight weeks of human interest stories on the news with little kids crying because they didn't get ride Space Mountain or the Flying Dumbos because POTUS and his entourage took over the park that day.
Tourism is also a lousy economic model because there are only so many good paying jobs in the restaurant and hotel industries. Everything is minimum wage or not much higher. A number of cities, Cleveland and Baltimore to name two based their urban renewals on the false logic that new stadiums downtown with flashy waterfront districts with bars and restaurants would bring their cities back from the dead. They're nice places to visit, go see a ballgame, and have dinner but at the end of the day the tourists go back home and the locals with a few exceptions are stuck with low paying, low skill service jobs.

This admin is pretty much bankrupt when it comes to economic ideas that work (they’re trapped in some sort of hellish 1970s government-control model).  He’s getting a bit desperate to do something like this—sort of how the Italian economy works “come and see where the gladiators walked…”
Posted by Ted Henkle at 8:10 PM