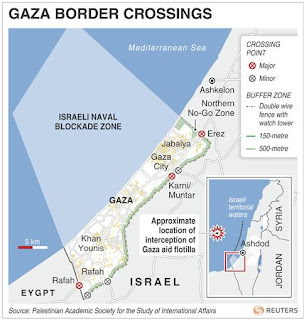 The Israeli Navy managed to stop the M/V (Marine Vessel) "Rachel Corrie" from running their blockage of the Gaza coast:

This operation was much more subdued than the boarding of the M/V "Mavi Marmara," earlier this week.  Mark Steyn comments on how liberal activists all remember Rachel Corrie, the American woman who got herself run over by an Israeli bulldozer; but none of them remember Rachel Thaler, a 16-year old British girl who died from wounds suffered in a suicide-bomb attack:

http://corner.nationalreview.com/post/?q=MjJlOGY3OGY3YWQ4MjYyMjVhNjYwODIzM2YwNWU5N2E=
Posted by Ted Henkle at 9:00 AM