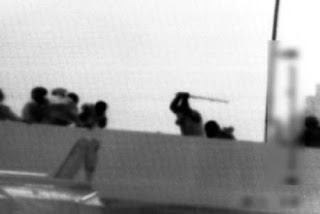 Another "Gaza Flotilla" is ready to run the Israeli blockade.  From The Seattle Times:

Here's what the distinguished Charles Krauthammer said about "those troublesome Jews" in the Washington Post (WP):

Barry Rubin discusses Turkey's role in sponsoring this "peace initiative," along with other recent actions.  From Pajamas Media:

While we're waiting to see what happens to the second Gaza "Love Boat," a couple friends posted some comments about Turkey:

Scary stuff. I do agree that the U.S. did not lose Turkey -- the Turks lost Turkey and they are going to pay for it eventually. Until then, they will cherish delusions of the rise of a new Ottoman Empire AKA the Caliphate (the latter will be an unspoken ideal with the core Islamists).
I think it is safe to say the Turkey will NEVER get in the EU now (not that I can see anyone wanting to!)

The issue isn't who lost Turkey, as you say, Turkey lost itself. It is acknowledging that Turkey is lost and figuring out what to do next.
Posted by Ted Henkle at 11:05 AM